Students ‘angry’ and ‘shocked’ at cut of disabilities training allowance

Allowance used by course participants to pay for food, travel and socialising 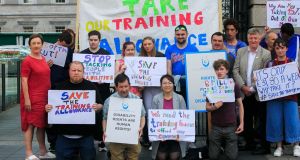 Students and advocacy groups protested on Thursday outside Leinster House, Dublin, over the axing of a students’ allowance which enables people with disabilities to attend training courses. Photograph: Gareth Chaney/Collins

Students with disabilities are “angry” and “shocked” following a decision by the HSE to axe a €31.80 training allowance.

Advocacy groups and students gathered in protest outside Leinster House on Thursday to highlight the cut.

The Rehabilitative Training bonus is provided each week to school-leavers with a disability who take part in training programmes. It aims to support their progression to further education or employment. There are currently 2,300 students eligible for the allowance which is due to be phased out, with incoming students in the autumn no longer qualifying for it.

Speaking outside Leinster House, Bevan Murphy (20) who had travelled from Cork to appeal to the Government to reverse the decision said she was “angry and fed up”. She carried a sign which said: “It’s only €31.80 a week. Why take it?”

“At the end of the day, why pick on people with disabilities – people that need support most?” she asked. “It’s disheartening.”

She said the allowance is “vital”, making up 15 percent of the weekly income of many students living with a disability, who are also in receipt of disability allowance.

“I don’t think the majority of people in Ireland can live off (that amount), let alone disabled people,” she said.

Melissa Harrington (26) was also upset by the cut.

“I was shocked to be honest, because I’m only new to the course. I could be one of the last to get the allowance,” she said.

“If I didn’t get it, I’d feel very left out because I wouldn’t be able to go on outings and all that with everyone.”

The allowance is used by those participating in training programmes to pay for food, travel and socialising.

Jason O’Callaghan (20), feared the cut could be a deterrent from training programmes.

The Rehab Group, which offers life-skills programmes for those with a physical or intellectual disability through its training division the National Learning Network, described the cut as “cruel”.

“Our staff are the ones who are going to be meeting people this month, telling them that they’re not going to get this allowance. So they’re quite upset about it,” spokeswoman Kathleen O’Meara said.

She described the programmes as “a very important bridge” to further education or work.

“It’s extremely unfair, to prevent people from doing a programme that would open up their whole lives for them,” she said. “The allowance makes all the difference because like anything, moving from school on to the next level brings expenses with it.”

She said it will be a small cut with big impact.

“We’re talking about a €220,000 cost of the allowance this year, from September to Christmas. That is a very small amount of money in the overall HSE budget.”

Independent Senator John Dolan, who is chief executive of the Disability Federation of Ireland said he believed the cut was at odds with the Government’s employment strategy, which saw it increase “the quota of people with disabilities to be employed in the public services from 3 percent to 6 percent”.

He emphasised the lack of consultation.

“We certainly didn’t know anything about it in the Disability Federation of Ireland and we’re a representative body of over 100 organisations.”

Deputy Caoimhghín Ó Caoláin, Sinn Féin spokesman on disability rights and vice-chair of the Oireachtas Disability Group, said it was “taking money from people with disabilities to shore up a need in another area”.

He called on the Government to reverse its decision.

“The 400 new participants in this programme from September are equally as deserving of that €31.80 per week as those who will be sitting beside them.”

In a statement, the HSE said ending the Rehabilitative Training (RT) bonus would yield €3.7 million over a four-year period which will be reinvested in disability day services.

Depending on priorities, it said, the savings will be used to upgrade part-time day service placements to full-time placements or to provide a day service for people who acquire a disability and are not eligible to receive funding allocated for school-leaver day services each year.

“Those currently in RT programmes will retain the bonus payment until they finish their RT programme, therefore the decision to discontinue the RT Bonus will not impact negatively on any individual.”