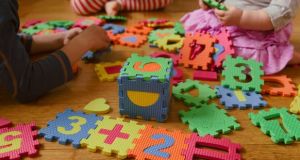 Childcare group Early Childhood Ireland have said they would have “serious concerns” about the use of CCTV in creches as quality childcare is centred around trust, the director of policy has said.

Frances Byrne told RTÉ’s Morning Ireland that such a move wouldn’t be a good one due to the privacy rights of both children and staff.

“It doesn’t bode well for trust, we don’t have CCTV cameras in classrooms in schools,”Ms Byrne said. “There’s also the huge risk that I’m dialling in to look at my children, but I can see your children as well, and we all know horrible things have emerged from the dark web etc.”

Critical risks have been identified in 37 creches across the country where serious non-compliance with regulations were identified.

Officials from Tusla and the Department of Children appeared before the Oireachtas Committee on Children on Wednesday to discuss the fallout from an RTÉ Investigates programme which revealed disturbing practices at a chain of Hyde and Seek creches.

The committee heard how installing CCTV cameras inside creches across the country is the “obvious solution” in light of child protection concerns in the sector.

Speaking on the issue, Ms Byrne said she could understand the feeling of reassurance of it, citing an article in The Irish Times by a parent who describes it, but says the issue needs a wider consideration and Early Childhood Ireland is interested in having this discussion and debate.

Ms Byrne is calling for Tusla, Pobal and the Department of Education to form a task force, with powers similar to Hiqa, to carry out inspections of child care facilities.

It is “a significant weakness” in Tusla’s powers that it takes up to 15 months to close down creches or childcare facilities where there are issues.

“A better way has to be found that combines due process, but also allows them to act quickly,” Ms Byrne said.

Ms Byrne said that one umbrella agency involving Tusla, Pobal and the Department of Education should be formed to expedite inspections. “Bring it all under one organisation, one set of eyes, a one stop-shop.

“If there are child protection issues Tusla should be allowed to close down a facility immediately. There should be a task force of teams from the relevant agencies that could go out and make a decision about a creche.

“Tusla’s powers need to be increased.”