This is how CCTV works in a creche: One parent's experience 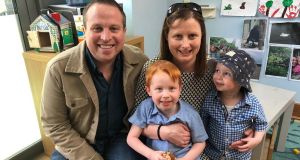 Philip and Catherine Curran with their boys Seamus (left) and Finnegan at Cocoon Childcare in Artane, Dublin.

When we began looking for a creche we hadn’t considered CCTV but once we saw it was there, that it was accessible online at any time, it sealed the deal.

Our two boys Seamus (4) and Finnegan (2) both attend Cocoon Childcare in Artane and we regularly log in to see what they’re up to. But it’s more of a comfort than anything else, to be able to see them whenever we want during the day.

The way it works is that parents are given secure passwords to log into the system and you can see through any of their multiple cameras. There are several rooms catering for various ages of children from babies to pre-school.

The cameras are not in the changing room or the kitchen because the kids are never in the kitchen but in the largest room there are three.

The Prime Time documentary was shocking and having the CCTV is a huge comfort. The people in our crèche are just brilliant, I can’t speak highly enough about them but it’s just nice to have that CCTV footage, a nice comfort blanket.

It’s a deterrent as well because the staff know it’s there and that anyone could be watching at any time.

“Checking” is the wrong phrase - it’s not about checking up on them, it’s more about getting a nice feeling by seeing them in there. I don’t think my boys are aware of it. I think they know the cameras are there but they don’t fully comprehend it.

I have seen my wife Catherine going in to collect the kids. I watched because while the worst time is dropping them off, the best time is seeing their faces when they’re being collected.

I used to tune in a couple of times a day because it’s a nice escape to see them happy and doing their arts and crafts. I know Catherine checks it daily.

The idea of someone else managing to look in is not a major concern. We have spoken about it but the pros outweigh the cons. For me it doesn’t pose an imminent threat anyway; all you are going to see is a classroom.

I think putting CCTV footage in crèches generally is the solution. Other parents seem to appreciate it too. We had some friends over the other night on a playdate and we were talking about how it’s a big help after seeing the Prime Time programme.