‘You took the expenses but you won’t go in and represent us and we need ye now more than ever,’ says Michael Ring 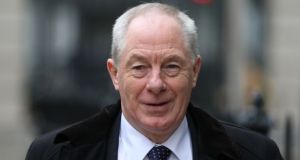 Sinn Féin has been accused of “taking the Queen’s shilling” but failing to represent Ireland in a Dáil row over funding for Border areas post-Brexit.

Minister for Rural and Community Affairs Michael Ring hit out at Sinn Féin TD Martin Kenny who had called for an all-Government plan to seek EU funding for small businesses and communities in particular on border areas.

He rounded on Sinn Féin over its abstentionist stance at Westminster, while still taking expenses. “All I can say to you is you’re not afraid to take the Queen’s shilling,” he said.

“You took the expenses but you won’t go in and represent us and we need ye now more than ever.”

He said Sinn Féin would be “a great help to us if you took up your place in Northern Ireland and took up your seats in the House of Commons so that we’d have somebody to represent the national view both in the North and in the England.”

Mr Kenny had complained that Border communities and businesses “don’t have the resources or capacity to build for the future” and he rejected Mr Ring’s assertion that his department was preparing for all Brexit scenarios by showing “maximum flexibility” on funding.

The Sligo-Leitrim TD said an importer told him he would have serious problems with Vat because if Britain exited the EU he would have to pay the Vat when he imported the product rather than later when he sold the goods.

“The Government need to come in and show that they have the resources in place to protect these small businesses.”

Mr Ring said a key element in his plans was “to ensure maximum flexibility in our programme of funding to allow for emerging responses” to a potential no deal Brexit.

Mr Kenny said however that flexibility on current funding was not enough.

“We need to be seeing here a plan to seek to get additional funds particularly from Europe because it is an EU problem not just an Irish one,” he said.

Mr Ring said: “We can’t talk about funding yet because we don’t know where the problem is. We’re still all hoping that we have a deal.”