What is the problem with a hard border? 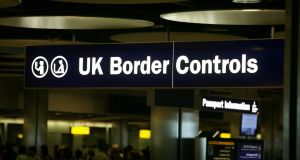 Border control at London’s Heathrow Airport. The Border with the North is real, and hard, because it runs through the minds of the inhabitants of this island. File photograph: Steve Parsons/PA Wire

Forgive me if I seem a little bit paranoid, but when everyone from Fine Gael and Sinn Féin to many sections of the media are relentlessly pushing the idea of “no hard border on the island of Ireland”, I begin to smell groupthink. Our diplomats and officials pride themselves on having sold the idea to our fellow Europeans, even if signs of buyer’s remorse are beginning to emerge. But I think I have a right to be suspicious of the strangely unified approach. The sad fact is, this is a country where groupthink and not rocking the boat is an existential principle, and we have suffered for it. So let’s perhaps look again at the facts with regard to the Border issue, and try to think the unthinkable, because the unthinkable may soon correspond to the political reality. The European Commission has left us in no doubt that the consequences of a no-deal Brexit is a hard border.

I understand perfectly well the motivation of the politicians of all stripes who are pushing the soft border. But the reality is, that almost a century ago, the majority of us accepted partition, deciding that retaining Northern Ireland in reality rather than on paper was too high a price to pay in exchange for some kind of freedom, flawed and minimal as it was. Given the chance in 1998, 94 per cent of us actually voted to remove the territorial claim, and replace it with “an aspiration”. The crucial point is that borders are not just a line in the ground, it’s the people and their culture.

Since the 1920s Northern Ireland has been moving away, politically and culturally, from the Republic, and now its fate is still linked to Great Britain’s. No matter what fudge the politicians come up with, even if the UK decides to somehow stay in the EU, in reality that divergence will grow, as we become more European and the UK becomes more . . . well, as of yet, nobody knows quite what. This is not such an unusual situation. In the European 20th century, tens of millions of people – Poles, Germans, Russians – have been displaced and subject to partitions and very hard borders. Is it some kind of island psychosis that we think that we’re the exception, and that we can somehow return the island to an original state of grace?

The Border with the North is real, and hard, because it runs through the minds of the inhabitants of this island. After partition, like children separated at birth and raised in different families, we developed in separate directions. The two educational systems formed the minds of their children in different ways. But most importantly, having an independent state, no matter how flawed and ultimately destructive it was for many of the people born in it, led to a certain maturity in terms of our identity as Irish.

For example, the Irish language has settled down into a comfortable if fairly marginal coexistence with English, whereas in the North it is still being weaponised. Having a state made certain forms of nationalism irrelevant. We were presented with a blank slate and as such have the cultural self-confidence to join up with the European community without any hang-ups about becoming a “vassal state”.

The North, as we know, is another story. Officially of course, we continued to pretend that there was some kind of unity.Even now, quite bizarrely, bodies such as the Arts Council continue to treat people and institutions from the North as if they are part of this country, (an approach which is hardly reciprocated). But the mental gap is there, has been growing for the last hundred years and accelerated in the 1970s. I attended Trinity College in the 1970s with many students from the North, but I can hardly recall ever having a conversation about the situation in Northern Ireland with them. This phenomenon is well documented by Susan McKay, who was also a student there at the time. The North felt further away and more foreign than New York, Paris, or, most importantly, London.

From the beginnings of the State our relationship with Britain has been far more important than that with the North, because we have been hugely dependent on it in so many ways. Not just as a market for our exports, and the landbridge for European imports, but above all as an alternative life for our people.

Over the last century the Irish people have moved back and forth to Britain, many of them making their lives there. Despite our much-vaunted neutrality, during the second World War a quarter of a million Irish people moved to Britain to work, enduring bombardment and wartime conditions, with many joining the British armed forces, as my own father did.

This dependence on Britain led to what I think of as a certain amateurism about being Irish. Working in British institutions in the 1980s, I was always surprised at the way they didn’t treat me as a foreigner. But it wasn’t benign: based on the evidence before them they had concluded that for many Irish, Ireland was a hobby rather than a real country, and it’s hard to blame them. This is why Brexit, and the harder the better, is good for us, despite all the short-term problems, as it will finally break the connection with England. The men who founded this State thought that recognising the North’s essential difference was a price worth paying for independence. It still is.

Michael O’Loughlin is a poet and commentator