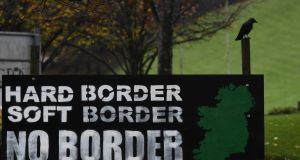 A sign in Derry calling for no border in Ireland . File photograph: Charles McQuillan/Getty Images

Brexit threatens to make Irish citizens in Northern Ireland “second-class citizens” after the UK leaves the European Union, an Oireachtas committee has been told.

Concerns were raised about the effect of Brexit on human rights by a joint committee of North-South bodies set up under the 1998 Belfast Agreement and Northern Ireland-based human rights experts when they appeared before the Oireachtas Joint Committee on Justice and Equality on Wednesday.

The committee was told that legislation was required in both the UK and Ireland to recognise “the particular status” of Irish citizens in Northern Ireland.

Brian Gormally, director of Northern Irish human rights group Committee on the Administration of Justice, said Irish citizens born in Northern Ireland would, after the UK leaves the EU, be EU citizens living in a non-member state and Brexit would make their status “constitutionally and practically insecure.”

To prevent “racist immigration policy” coming into force and Northern Ireland becoming “one big border,” Mr Gormally urged the Government to reject “any practice of racial profiling” and begin a debate about managing immigration into the Common Travel Area, the series of decades-long arrangements protecting the freedom of movement of people between Ireland and the UK.

Mr Gormally said the open Irish Border was a measure of “how far we have come” and that a hard border would “give people the concern, the worry, the fear that we are going backwards” and would undermine confidence.

“It is a border of the mind as well as geography,” he said.

Mr Gormally and Colin Harvey, a law professor at Queens University Belfast, both told the committee that Brexit had revealed the Belfast Agreement has not been effectively implemented in UK law.

Prof Harvey said there was a crisis in rights and equality protections in Northern Ireland that was “profoundly troubling” and warned Brexit would have a serious impact on protections*.

‘Genie back in the bottle’

“It is disappointing at this stage that Irish citizens in the North have not featured more prominently than they have in these legal arrangements,” he said.

Mr Gormally said that Brexit had opened up questions of identity and citizenship not seen since well before the Belfast Agreement. “Those genies cannot be put back in the bottle,” he said.

“Although the UK government has stated its commitment to protecting the Good Friday Agreement ‘in all its parts,’Brexit negotiations currently depart from that common framework, creating risks for people on both sides of the Border when it comes to both the rights and remedies available to them,” said Ms Logan.

Mr Gormally questioned the post-Brexit measures facing for Irish citizens in Northern Ireland: the UK Home Office would treat Irish citizens as “really British” under UK nationality law, the Common Travel Area would “sort all this out” and EU citizens living in the UK retaining their rights by applying for “settled status.”

“None of these options is appealing as they all involve the implications that those who choose Irish identity are in some way second-class citizens,” Mr Gormally told the committee.

“Their rights as full participants in Northern Ireland life would depend on either a denial of their Irish nationality, as yet unknown bilateral agreements between the UK and Ireland about the Common Travel Area or asking the Home Office to graciously allow them leave to live in the land of their birth.”

The reality of Brexit was that Irish citizens born and living in Northern Ireland would have “no legal connection to the jurisdiction in which they were born,” he said.

There needed to be formal treaties between Ireland and the UK to protect their rights, he said.

Prof Harvey said that people talk about the Common Travel Area and hold it up as a solution but said that the arrangements covering it needed to be “written down” because it was “built on sand.”

Mr Allamby told the committee that there were “significant gaps” in the proposed UK withdrawal agreement with the EU that would diminish human rights and equality protections for Irish people.

The UK’s decision no longer to be bound by the EU Charter of Fundamental Rights would lead to a “loss of legal certainty and consistency,” he said.

The Common Travel Area needed to be “solidified in lawâ” because its formal legal underpinnings were “relatively scant” and rely on EU law.

Ms Logan said Northern Irish people should continue to be offered EU citizenship or equivalent rights after Brexit. The protection of Border communities and migrant workers that might be threatened by a hard border “remains paramount,” she said.

Prof Harvey, who was born in Derry and lives in Belfast, held up his Irish passport at the committee hearing.

He said his Irish identity was “about the human rights of everyone on this island” and as an Irish and European citizen he wanted to know “what rights I will have” after Brexit.

*Correction: An earlier version of this story incorrectly stated Prof Harvey  warned the Brexit deal would have a serious impact on protections.