Is there any way to avoid a hard Border in a no-deal Brexit?

If UK imports chlorine-washed chicken from US, what stops it entering Irish and EU markets without checks? 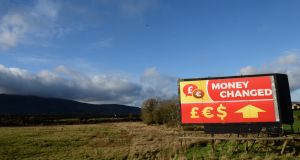 Close to the Border between Dundalk, Co. Louth and Newry, Co. Down. Photograph: Dara Mac Dónaill

Can a hard Border on the island of Ireland be avoided in the event of a no-deal Brexit? Probably not, is the answer. Just as the European Commission spokesman said on Tuesday.

The reason for the qualification is that there would technically be ways around it, but not ones which the governments involved – in Ireland, the UK and the rest of the EU – would be likely to all sign up to. So if there is a no-deal Brexit, some kind of checks and controls at the Irish Border look inevitable. Where there may be scope for discussions is how these would operate.

After Brexit, the Irish Border becomes an external frontier for the EU trading bloc. In a no-deal scenario, the UK would leave the EU trading regime – the customs union and single market – overnight.

Goods are checked crossing borders for a few reasons. First, there is a need for customs checks to ensure goods are properly cleared, that there is clarity on where they come from and that all appropriate taxes and duties are paid. Under EU rules, goods cannot enter the single market unless this happens.

Second, there is a need in some sectors for goods to be checked to ensure standards and regulations are met. For the EU, these rules are set by single market regulations. Movements of animals and food products are particularly sensitive – to ensure food safety standards and animal health, in particular – but there is also a wider issue of safety, for example in toys and electronic products.

Checks are vital not only to ensure compliance but also to control smuggling. The Irish Border has a history of smuggling of diesel, tobacco and alcohol, but new opportunities would emerge post-Brexit, particularly as the UK’s custom rules and regulatory procedures diverged from the EU over time.

There would be scope for discussion about how the border would operate. Technology and online compliance could help a lot. But goods entering the EU need to clear customs, some need to be checked for standards and smuggling needs to be controlled. For the Irish Border, the food and livestock issues are central and the nature of these products means it is impossible to avoid physical checks at some stage. What would be needed in terms of actual infrastructure at the border itself to achieve all this could be debated? In other words, how hard does a hard border need to be ?

So how could all this be avoided? Well the only way to avoid a border in Ireland would be to conduct the necessary checks somewhere else. Practically – and politically – after a no-deal Brexit, this looks very difficult to achieve.

Consider the options. Goods could be controlled crossing the Irish Sea from the UK to Ireland. However, for this to work, the North would need to remain in the same customs regime as the Republic and to apply the same regulatory rules to goods.

As the UK has said it wants to leave these regimes, this would lead to separate rules applying in the North than the rest of the UK and some new checks on goods crossing the Irish Sea. And all that is anathema to the DUP, which is supporting the UK government. It would, in effect, be a return to the original idea of the Northern Ireland only backstop.It is very hard to see it being a runner in the wake of a no-deal Brexit.

Is there another option? The idea that checks could be conducted at EU ports like Calais and Rotterdam rather than at the Irish border was reportedly referred to at the Taoiseach’s briefing with other party leaders on Tuesday evening.

This appears to have been raised as an example of what the EU might insist on if we don’t put up border checks. In other words, the EU would say to us that this is how they would control goods coming into the single market if we did not do it.This would leave Ireland as half-in and half-out of the EU trading bloc. It is hard to see how this would even be possible, or would operate in practice.

Any suggestion of checks on goods leaving Ireland for the EU would threaten our membership of the EU single market, a cornerstone of our economic policy. “The effect of putting the border in France or Netherlands would be considerably worse than that of a border to the North and Britain. This is categorically not an option,” according to Edgar Morgenroth, economics professor at DCU who has studies the trade impact of Brexit in detail.

He points out that trade with the other EU countries outweighs that with the Britain and the North and membership of the EU trading bloc is central to our attraction for foreign direct investment, particularly from the US.

So in the event of a no-deal Brexit, avoiding checks and controls between the two parts of the island looks impossible, even if there is scope for debate on how it would operate. EU negotiator Michel Barnier said on Wednesday that the Commission would try to work with Ireland and the UK to find a way to conduct the necessary checks and controls “without putting back in place a border.” Presumably this means he is trying to avoid physical border infrastructure.

Movements of people should continue unimpeded – we are not talking about a security border. But goods will need to be checked and controlled somewhere. In the longer term, the greater the UK diverges from the EU, the more vital these become.

For example, if the UK agrees to import chlorine-washed chicken from the US or cheap beef from Argentina, what is to stop these goods entering the Irish – and EU – markets if there are no checks?

There are questions about how this would play out. Would the Irish government have some time after Brexit before having to move and if so how long? What trade policy will the UK apply immediately after it leaves? It is assumed that it will revert to rules set by the World Trade Organisation, including the imposition of tariffs, but no guarantee it will do this from day one.

Would the UK – seeing the chaos of a no-deal – come back quickly looking to talk business with the EU? And if so how long might this take?

All these things will play into the debate if a no-deal happens. But Ireland will quickly come under pressure to bring in border checks of there is a no-deal Brexit – and so, incidentally, will the UK. It is just the way the world works.