Prospect of border checks in France and Netherlands downplayed

Varadkar remark ‘made in passing’ at Brexit briefing for Opposition leaders 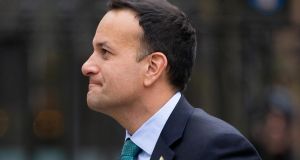 Taoiseach Leo Varadkar is to meet all party leaders in the Dáil on a fortnightly basis to maintain political consensus on the approach to Brexit. File photograph: Tom Honan

Sources at Taoiseach Leo Varadkar’s briefing of Opposition leaders on Tuesday night downplayed the prospect of border checks in France and the Netherlands that could affect Irish trade in the case of a no deal Brexit.

While Mr Varadkar did mention the prospect of such checks, a number of those present said it was a remark made in passing.

It was not, said one source, as if Mr Varadkar referenced checks in Calais and the Rotterdam as a concrete plan being proposed by the European Commission.

The source said it “could well be an option” but said it is clear that “all the eggs are in the basket of a [Brexit] deal being done”.

The general mood of of the meeting, it was added, was a “strong consensus” that the “deal on the backstop should be pursued” and that the Government should “give no ground” on the backstop.

Mr Varadkar is to meet all party leaders in the Dáil on a fortnightly basis to maintain political consensus on the approach to Brexit.

Sinn Féin leader Mary Lou McDonald confirmed Mr Varadkar did not suggest an EU single market border could be in France or the Netherlands rather than Ireland.

Asked on RTÉ’s Morning Ireland if such a proposition was “a runner”, Ms McDonald said: “This is absolutely not a runner, I have to say that was not forwarded as a proposition by Leo Varadkar or by anybody else as the objective here.”

“I have emphasised to the Taoiseach time out of number that the task now for him and his government is to hold their nerve.

“We need very steady heads, whatever pressure, whatever overtures that comes from London or anywhere else, the backstop has been negotiated. It’s not perfect.

“Brexit is still bad news and I say that as somebody who is very critical of the European Union, but let me tell you whatever criticism of the European project, Brexit for this country was never the answer.”

Ms McDonald told Morning Ireland that European Commission spokesman Margaritis Schinas was right when he said there would need to be a hard border in Ireland in the event of a no deal Brexit.

That was why the backstop was so important, as it mitigated the effect of Brexit in the event of the UK “crashing out” with no agreement, she said.

The Government has the responsibility to start preparing for that eventuality, she said.

The first job is to look for “breathing room” for Irish businesses, for society in general and for peace structures.

The Belfast Agreement was “the ultimate backstop”, Ms McDonald added.

Later, Minister for Agriculture Michael Creed said the Government is not countenancing a border infrastructure on the island of Ireland, “in any shape or form”, in the context of Brexit preparations.

He said that any reimposition of checks and border infrastructure would run the “high risk” of leading the country back into a situation where we would revisit the troubles.

Meanwhile, the EU’s chief negotiator Michel Barnier has said a temporary safeguard to avoid erecting a physical border between Ireland and Northern Ireland after Brexit would serve no purpose.

In an interview published in the newspapers Le Monde, Rzeczpospolita and Luxemburger Wort on Wednesday, Mr Barnier said the current backstop proposal over the border was the only option on the table.

“The question of limiting the backstop in time has already been discussed twice by European leaders. This is the only possible option because an insurance is of no use if it is time limited,” Mr Barnier said.

European Union Economic Affairs Commissioner Pierre Moscovici said on Wednesday the risk of a no deal Brexit had increased in last few weeks and it was up to the British to tell the EU what they wanted.

With Britain due to leave the bloc on March 29th, Mr Moscovici told Reuters at the World Economic Forum in Davos that the EU was ready and waiting, and nobody wanted a no deal outcome. - Additional reporting Reuters