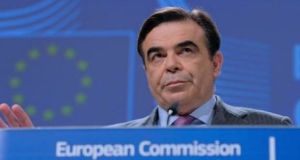 EC spokesman Margaritis Schinas said on Wednesday morning: “The EU is fully behind Ireland...that has not changed.” Photograph: Getty Images

The European Commission spokesman who confirmed a no-deal Brexit would mean a hard border has insisted the European Union’s position has not changed and it is still “fully behind” Ireland.

Margaritis Schinas was responding at the daily press briefing to uproar in Ireland over his comments 24-hours earlier about the inevitability of a hard border in Ireland in the event of a Brexit no-deal.

“The EU is fully behind Ireland...that has not changed,” he said on Wednesday morning.

However, Mr Schinas also re-emphasised Ireland’s responsibility for protecting the integrity of the EU single market.

That is a barely coded reminder that Ireland may not have any alternative in a no-deal scenario other than to check goods coming across the Border. How it does so is another matter.

“The EU is determined to do all it can, deal or no deal, to avoid the need for a border and to protect peace in Northern Ireland,” Mr Schinas said in a prepared statement. “The EU is fully behind Ireland and has expressed, on numerous occasions, full solidarity with Ireland. That has not changed.”

“We will continue to remind the Government of the United Kingdom of its responsibilities under the Good Friday Agreement, deal or no deal.”

“At the same time, Ireland and the EU have responsibilities as regards the protection of the Single Market and Customs Union. A product that enters Northern Ireland, coming from another part of the United Kingdom, enters the Single Market as a whole.”