Responding to questions at the daily press briefing, European Commission spokesman Margaritis Schinas confirmed that a no-deal Brexit would mean a hard border. 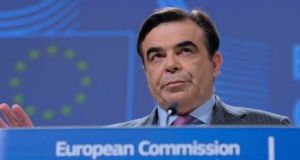 The Government strongly rejected suggestions from the European Commission on Tuesday that a hard border would be necessary if the UK leaves the EU without a Brexit deal.

However, senior figures privately admitted to being taken aback by the intervention in Brussels by the commission’s chief spokesman Margaritis Schinas, who said “you will have a hard border” when asked at a daily press briefing about the effect of a no-deal scenario on Ireland.

Tánaiste Simon Coveney quickly sought to rebuff the assertion by insisting the Government would not accept the “re-emergence of border infrastructure on this island”.

Taoiseach Leo Varadkar later told the Dáil that if there was a no-deal outcome, the British and Irish governments and the EU “would have to negotiate an agreement on customs and regulations that would mean full alignment so there would be no hard border”.

“We are not going to be putting up border infrastructure,” a spokesman for the Taoiseach said, adding that the Government was not notified in advance of Tuesday’s comment by his counterpart in the commission.

Mr Varadkar and Mr Coveney said that in a no-deal scenario the Government would have to protect the EU single market and customs union.

The Government also issued a statement pointing out that commission president Jean Claude Juncker had told the Dáil last year that there would be no hard border after Brexit.

The backstop, an insurance policy agreed between the EU and UK to ensure there is no hard border in Ireland after Brexit, has proven to be a major sticking point in attempts to move the withdrawal agreement through Westminster ahead of the March 29th deadline.

MPs could vote next week on an amendment calling for UK prime minister Theresa May’s Brexit deal to be approved on condition that a time limit is added to the Northern Ireland backstop.

Government sources played down the suggestion that the commission was seeking to put pressure on Ireland to ease its position on the backstop. Mr Varadkar and Mr Coveney both stressed that the backstop would not be changing.

A commission source was adamant that Mr Schinas’s comments merely expressed a “statement of the obvious”, and did not represent a new approach or a hardening of its position.

Recently, he said, Mr Schinas had addressed the same issue more obliquely by observing that in the event of a no-deal UK departure Ireland would need to uphold its obligations to defend the integrity of the single market, a clear reference to the need to install border controls.

To date, however, the commission has refused to be drawn on the issue despite repeated questions from journalists, and appeared content to let the Government dismiss the problem by insisting it would not be planning for border controls.

Privately, however, commission officials have been deeply sceptical that would be possible, and diplomats from several member states have also said they believe that Ireland would come under pressure from European capitals to protect the single market.

The Taoiseach on Tuesday night met the other party leaders to brief them on Brexit and a forthcoming package of legislation to deal with the possible consequences of a no-deal in two months’ time.

Sources at the meeting said the party leaders expressed unanimous support for the Government’s position on the backstop.