Taoiseach insists there will be no hard border despite EU statement

‘Government will not support the re-emergence of border infrastructure’, says Coveney 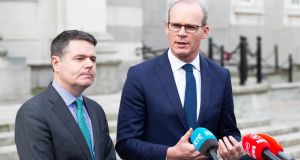 Minister for Finance Paschal Donohoe and Tánaiste Simon Coveney, who is also Minister for Foreign Affairs and Trade with responsibility for Brexit. Photo: Tom Honan

Ireland will not accept a hard border after Brexit under any circumstances, Taoiseach Leo Varadkar and Tánaiste Simon Coveney have insisted.

Their comments came after a spokesman for the European Commission yesterday suggested a hard border in Ireland would be necessary if the UK left the EU without a deal.

“So what we’re saying is very clear: the Irish Government will not support the re-emergence of border infrastructure on this island,” Mr Coveney told reporters in response to the intervention in Brussels.

European Commission spokesman Margaritis Schinas had earlier said that if there was a no-deal Brexit, in Ireland “you will have a hard border”.

Mr Coveney, who is Minister for Foreign Affairs, acknowledged that avoiding a hard border – which would require customs checks at the border with Northern Ireland – would be “very difficult”.

However, he repeatedly stressed that the withdrawal agreement and the backstop negotiated over 18 months was the best way to avoid such an imposition.

“We shouldn’t lose focus on where the focus should be – which is in Westminster. Because if people are rejecting the backstop and the withdrawal agreement as a mechanism to prevent that border infrastructure in the future, then I certainly think the people who are making those argument have an onus to talk about alternatives,” Mr Coveney said. “And the truth is we cannot wish away this problem.”

He said that in the event of a no-deal Brexit, then the two governments and the EU would have to work together to “prevent border infrastructure”.

“But there is no easy way of doing that,” he added.

Mr Varadkar later said that the Government would “hold firmly to our position on the backstop”.

Answering questions in the Dáil, he said a no-deal outcome would place Ireland in “a real dilemma” as the State would, as part of the European Union, have obligations to protect the single market.

“The United Kingdom will have joined the World Trade Organisation and will have obligations to implement WTO rules, and the UK and Ireland will have an obligation to honour the Good Friday Agreement, protect the peace process and honour our commitment to the people of Ireland and Northern Ireland that there will not be a hard border,” he said.

“What would we have to do in that scenario? We would have to negotiate an agreement on customs and regulations that would mean full alignment so there would be no hard border.”