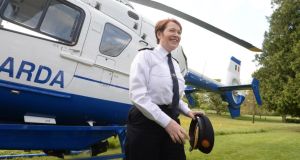 The Charleton inquiry is the place to deal with reports of missing phones and other Garda matters, Taoiseach Enda Kenny has said.

Mr Justice Peter Charleton, who is heading the Disclosures Tribunal, “is the very best person to deal with the matter”, he told the Dáil on Tuesday.

Mr Kenny was responding to the Solidarity TD Mick Barry, who highlighted reports that the mobile phone of the Garda Commissioner, Nóirín O’Sullivan, could not be located.

He said the former Garda press-office director Supt Dave Taylor claimed he had sent the commissioner a text telling her that a journalist had interviewed a person making allegations against the whistleblower Sgt Maurice McCabe. Mr Barry said Mr Taylor claims the commissioner sent a one-word reply: “Perfect”.

He said it was now reported that Ms O’Sullivan’s phone could not be provided to the Charleton inquiry.

Mr Barry said he understood Ms O’Sullivan used a second, personal mobile, known as the “off-site phone”, for some Garda business. “Has that been sought? Has she lost this phone, too?” he asked.

Mr Barry referred to the Irish Times/Ipsos MRBI opinion poll finding that 57 per cent of people believe the commissioner should resign. “The people who are policed by An Garda Síochána, who pay gardaí’s wages, have spoken – and spoken fairly decisively.”

Criticising the Taoiseach, Mr Barry claimed that “this is all part of your legacy, and it is far from perfect. Are you going to continue to keep the commissioner in her place and allow the further undermining of the Charleton tribunal?”

Mr Kenny rejected claims that the Government had failed to act. He said Mr Justice Charleton was the most appropriate person to carry out the investigation. “He has already adopted a no-nonsense approach to dealing with the business before him.”

Referring to the reports that the commissioner’s phone was missing, Mr Kenny said: “I don’t know whether or not it’s a true statement, whether it’s an allegation that stands up or not, but I expect Mr Justice Charleton will find out the truth of that.”

Mr Barry suggested the Taoiseach should “ask the Garda Commissioner about the phone, try to establish the position and then let the House know”. But Mr Kenny said the Charleton tribunal was “the place where the accuracy, the veracity and the truth will be established”.