PBP objects to rules on rotating members of abortion committee 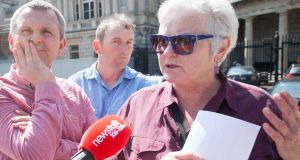 A ruling that Oireachtas groupings should not be allowed to rotate members on the abortion committee has been objected to in the Dáil by People Before Profit TD Brid Smith.

Ms Smith and Solidarity TD Ruth Coppinger had hoped to share a position on the Joint Committee on the Eighth Amendment of the Constitution, which will consider the recommendations of the Citizens’ Assembly.

“Substitution needs to be allowed because someone can get ill or have a family disaster or indeed fall under a bus and they need to have a substitution on the committee,” Ms Smith said.

She said the ruling disallowing rotation would disproportionally affect Oireachtas members who had a “track record of fighting on abortion rights for a pro-repeal stance”.

She said some of the bigger parties had struggled to find people to sit on the committee. “What does new politics mean if we do not reflect it in terms of how we deal with this issue?”

Ms Smith said they were also very concerned and each group in the Oireachtas should be allowed to do its business in the way its members saw fit.

The 21-person committee must report its conclusions and recommendations within three months of its first public meeting.

It is not expected to sit through the summer, but can meet in private to select a chairperson.

Fine Gael will be represented by Senators Jerry Buttimer and Catherine Noone, and TDs Hildegarde Naughton, Peter Fitzpatrick, Bernard Durkan and Kate O’Connell.

Sinn Féin will be represented by TDs Jonathan O’Brien and Louise O’Reilly, as well as Senator Paul Gavan.

Labour’s Jan O’Sullivan will be joined on the committee by Catherine Murphy of the Social Democrats and Clare Daly of Independents 4 Change.