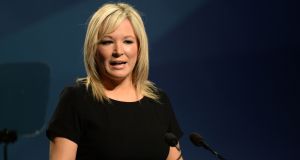 Ms O’Neill said Brexit was “a reckless British Tory agenda” which would have “devastating effects”, but called on the Republic and the North to redouble efforts to develop a sustainable economy.

“We need to lose the reputation as a tax-avoidance facilitator because, like it or not, that is the reputation abroad and it suits those who wish to take away our sovereignty,” she said.

Ms O’Neill criticised the Fine Gael-led Government’s approach to Brexit negotiations, saying the Taoiseach needed to argue the case for the entire island.

“The North is at risk of being collateral damage and it is no time for quiet diplomacy by the Dublin Government,” she said.

She said British prime minister Theresa May had no regard for the people of Ireland.

The Border at Newry or Strabane would become the Border of the European Union. Northern Ireland should be designated special status, she said.

Ms O’Neill said she had got to know the Fine Gael leadership contenders Leo Varadkar and Simon Coveney well when she served as minister for health and minister for agriculture in the Northern Executive.

She said she did not want to enter the “Leo versus Simon contest arena”, but offered her assessment of the current political situation in the Republic.

“A fragile minority Government under the Fine Gael/Fianna Fáil partnership does little for longer-term political or economic stability,” she said.

“How can it last is the question, I think, and what type of Government coalition do we need which is fit to take the country forward with all the domestic and international policy challenges over the next decade?”

Turning to the stalemate at Stormont, Ms O’Neill said the political process was broken.

Talks would resume at the beginning of next month after the British general election, she said.

“We’ll only return to Stormont on the basis of equality and with Unionist partners who are competent, who can command public confidence and who are fit for office.”