Pay talks: ‘The unions have one figure in mind. I’ve a very different figure’, says Donohoe 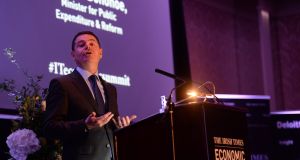 Minister for Public Expenditure and Reform Paschal Donohoe has said talks on public service pay had reached a point where securing agreement was going to be difficult.

Speaking at The Irish Times Economic Summit in Dublin on Tuesday morning, Mr Donohoe said the negotiations were “challenging for both sides of the table” at the moment.

“Those negotiations are very, very tough and while I am approaching them in good faith, I do believe that securing agreement on many of the areas that are now being negotiated is going to be difficult.”

During a questions and answers session at the event, Mr Donohoe said the Government had a clear agenda about what was needed from a productivity point of view. Negotiations in relation to pay were always going to be “very challenging”, he said.

Turning to the value of public pensions, he said this now had to be taken into account during negotiations. “This is going to be a challenge for both sides of the table.”

However, Mr Donohoe said the talks had not reached a point “where we’re talking about having to salvage anything yet” and he did not believe the issue would cause a general election.

In his address, Mr Donohoe said the European Union should not be defined by the exit of a member but rather by the wishes and aspirations of those who remained. He said Ireland needed to talk about trade in a new way. He stressed that Irish trade with the United States was a “two-way flow”, with 430 Irish companies operating in all 50 states employing more than 80,000 people.

On corporation tax, he said the predictability of the 12.5 per cent rate was as important as the rate itself because it allowed businesses to plan, invest and grow.

Mr Donohoe said uncertainty and change “have always been with us”, but the current level of intense change meant moving into an era when unpredictability could be the norm.

“Orders, whether they be political, social or economic can be challenged. Norms are being shaken.”

He said it should not be taken for granted that the level of social, political and economic freedom enjoyed at present will exist in the same way or in the same format for the generations to come.