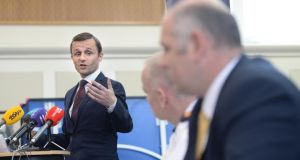 Taoiseach Enda Kenny said he was upset by the failings in the State’s child-protection system revealed by Prof Geoffrey Shannon’s audit of cases where the Garda Síochána removed children from their homes in emergency cases. The Garda-commissioned report, published on Monday, found that children were treated like “human trash” in some instances.

Mr Kenny told the Dáil that “work is already well under way in relation to the many issues commented upon by Dr Shannon in his fine report”.

He said Tusla, the child and family agency, would continue to roll out its national child care information system, which would significantly improve the data available about vulnerable children.

He added that the Garda’s national child-protection unit was now carrying out an audit at local level and that Minister for Children Katherine Zappone had asked for a report on the matter. “I just want to say we are not finished with this at all,” Mr Kenny said.

The Taoiseach described Monday night’s RTÉ Investigates: Chaos in Care report on the neglect of children as harrowing, distressing viewing.

Fianna Fáil leader Micheál Martin said Prof Shannon had issued a damning report which called into question the Government’s commitment to fulfilling its constitutional obligations in the protection of children.

“The complete absence of an out-of-hours social work service is highlighted in the report and Prof Shannon says there is also a troubling gap in how children with behavioural difficulties are treated by the system,’’ he added.

“If the Constitution is to have any value for these children, the Government must acknowledge that it is failing them and failing in our constitutional obligations to them,’’ he added.

Labour leader Brendan Howlin said Prof Shannon’s words at a press conference seared into people, as he described children being treated as human trash in some cases. “It is beyond shocking,’’ he added.

Mr Kenny said he was not happy with the situation which had arisen. He said there were questions to be answered as to what was happening with public time, money and employees when children were in difficult situations.

“The result is that vulnerable children are in very serious circumstances in some cases,’’ he added. “It is our responsibility to see that everything humanly possible is done to put that right and, if that requires further answers from Tusla, then so be it.’’