‘Just Society’ is a key battleground in Fine Gael contest

Analysis: For Coveney it is the party’s soul, for Varadkar supporters it is just a slogan 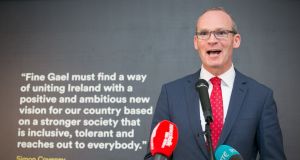 Simon Coveney at the publication on May 21st of his road map to change Fine Gael, government and the country. Photograph: Kenneth O Halloran

For Simon Coveney, it is the soul of Fine Gael. For supporters of Leo Varadkar, it is just a slogan, or a moment in the party’s history, that it is now past time to bury.

Declan Costello’s 1965 Just Society document has almost become a character itself in this Fine Gael leadership contest. Coveney cites it as his inspiration as he seeks to draw on its traditions of social reform to appeal to the party grassroots.

Although hugely influential on a generation of politicians, such as Garret FitzGerald, the Just Society document was never fully accepted within the party.

Now, as Fine Gael prepares to shape itself according to Varadkar’s wishes, his supporters say it is time to move on from the Just Society.

While seen as a link to the era of Costello’s desire for social reform and FitzGerald’s constitutional crusade, it is “more of a myth” for some, who claim that its other messages of State intervention in markets have long since passed.

While Coveney says its values are his values, supporters of Varadkar claim the Minister for Housing uses it as a vehicle to differentiate himself and to appeal to older Fine Gael members.

Coveney’s message at the leadership hustings was blunt as he appealed to those he claimed would be uncomfortable with the direction Varadkar would take Fine Gael.

He has described the contest as a battle for Fine Gael’s soul, and said he would continue to fight for his beliefs even if he loses.

Yet the profile of those supporting Varadkar, in the parliamentary party at least, shows the present day Fine Gael has left the Just Society behind. It is repeatedly described as a mere “slogan”, a touchstone to a time in history.

Varadkar, who once mocked FitzGerald as someone who “tripled the national debt and had effectively destroyed the country”, has claimed his policy platform is not one that harks back to 50 years ago but seeks to take the best of left and right to move forward.

His vision has found a receptive audience among TDs and Senators who entered Leinster House from 2007 onwards.

The Dublin West TD took his Dáil seat in 2007, arriving with his contemporary Lucinda Creighton, who has since left Fine Gael.

The 2011 intake further expanded the right-of-centre cohort. The last Dáil, between 2011 and 2016, saw the formation of the so-called “five-a-side” club of then first-time Deputies who took right-leaning positions on issues such as public sector pay.

While Varadkar has spread his base far wider, his campaign manager Eoghan Murphy was the effective leader of the “five-a-side” group. For the class of 2011, Varadkar is offering the definition they are looking for.

Among TDs who came into Leinster House following last year’s election, the picture is more mixed.

Kate O’Connell and Maria Bailey are Coveney supporters who profess themselves adherents to his beliefs, as does Simon Harris, the Minister for Health who took a Dáil seat in 2011.

Despite dismissing Just Society as a document of its time, Varadkar’s supporters say he is best placed to deliver on one of its key messages, equality of opportunity, and champion FitzGerald’s social liberalism, while also drawing on the Fine Gael tradition of fiscal responsibility. “He is Garret FitzGerald and John Bruton, ” said one TD.

Yet some Deputies in the Varadkar camp hope that the more right-wing policies that have been a feature of his leadership campaign will be muted if he succeeds Enda Kenny.

“If you were to take the names off each candidate and give me their platforms, and speeches blind, I’d be rowing in behind Simon,” said one.

“[Eoghan] Murphy and Leo have rambled off dangerously far to the right of centre. In winning this contest on that platform we may well find he has dented his public popularity overall.”

Another TD says the more controversial policies will never survive coalition negotiations, in any event.

“We are not talking to the wider electorate. There is no danger any of that stuff would be implemented because Fine Gael will have to rely on others to get into government.”

Mood of the electorate

Some in Fianna Fáil believe that in taking Fine Gael down a socially and economically liberal route, Varadkar will be an easier political adversary that Coveney.

Micheál Martin fought the last election on the social democratic pitch of fairness and an “Ireland for All”, and senior party figures believe that is still the mood of the Irish electorate.

Fine Gael’s opportunity, Varadkar supporters believe, is to correctly judge the mood of the next election.

“It’s the coping classes. The party who stands up for those people will win the next election. The people who give out about social welfare scroungers are those who are closest to that position but get out and work.”