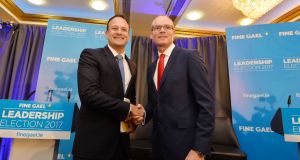 Within minutes of the Fine Gael polling station opening in the Mullingar Park Hotel at 6 o’clock last night, a queue had formed that snaked all the way out the door.

“Look at this,” said the party’s general secretary Tom Curran. “This is democracy in action.”

And so it was – one of the 26 polling stations to be set up around the country to allow the party’s 21,000 paid-up members to cast their votes for either Simon Coveney or Leo Varadkar as party leader.

The Mullingar station was for members from Longford-Westmeath, where the party has a high membership of 1,070 in total.

Events in Mullingar suggested turnout among party members is probably going to be high. It also signalled that membership of Fine Gael, like most other parties, tends to be from an older demographic. The majority of the voters appeared to be pensioners.

The leadership election is reckoned to have cost the party €250,000, most of it in the operation that will allow the 21,000 members to vote.

On a straw poll among those prepared to disclose their voting intentions, it seemed Simon Coveney was doing well.

John and Mary Daly, retired teachers from Athlone, were both voting for Mr Coveney. “I like how he presents himself. He is experienced, mature, balanced,” she said. “He is very good in an argument. He keeps his cool.”

Her husband agreed: “He’s very good at saying what he feels about and he should be good for the country.”

Fergus Reynolds, a retired bank official, said he was disillusioned with politics at the moment, partly due to the way in which the Seán FitzPatrick court case was handled.

He said he had voted for Leo Varadkar. “He is an intelligent, articulate man. He is gay, my oldest son is gay. I prefer him to be honest. He is some operator. I am not saying Coveney is any worse or any better. For a few of those personal reasons, I gave him my vote.”

Maura Kilbride Harkin and her daughter Breeda would not disclose how they voted but both said it was a great process for the party.