Work to begin on Arklow waste-water plant ‘early next year’ 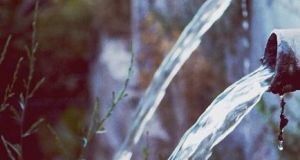 Retired Arklow councillor Nancy Quinn has a good head for dates. She remembers the waste-water treatment plant proposed for her Wicklow town when it was included in a plan drawn up in 1988.

More than 30 years on, she remembers one of the longest planning battles in the State’s history, which saw townspeople bitterly divided about where the necessary plant should go.

Today raw sewage continues to flow into the Avoca river through the town centre. “Everybody wanted it [the plant], there was no issue,” the former Green Party councillor remembers.

The plant was to have been located on the town’s north docks, though in 1993 everything changed and it was decided that it should be built in Seabank. Then locals divided, and sharply.

A 30-year campaign followed that divided the town between those who favoured the original location and those who wanted Seabank because it was further out of town.

Some locals formed the Arklow Action Group to appeal Wicklow County Council’s decision to shift to Seabank, including the environmental group Coastwatch.

“The plant was very much needed but [not] for a vulnerable site like Seabank,” says Coastwatch’s Karin Dubsky, because Seabank was threatened by erosion and was home to the very rare Moore’s horsehair.

In 2004 a Bord Pleanála hearing heard that a petition in favour of Seabank – said to contain the signatures of 4,500 people or 99 per cent of the town’s adults – actually contained 3,035 signatures.

Some names were signed up 16 times. Even Hollywood character “Forest Gump” found a place on the list. “It was bitter, it was very divisive. Those of us who opposed were portrayed as a lunatic fringe,” says Ms Quinn.

Despite the erosion fears and the threat to the Moore’s horsehair, the Arklow Action Group lost its appeal, and the plant was given the green light in January 2005.

That December, however, a caravan park company based near Seabank went to the High Court claiming the beach and sand dunes would be damaged by a Seabank treatment plant.

In 2010 Arklow Town Council said it would press ahead with the scheme, then valued at €35 million, after winning the legal battle which went all the way to the Supreme Court.

“But Seabank is gone now. It was washed away. We told them the coast was eroding. Nobody was against the sewage treatment plant; it was in the wrong place. If they had built it it would be gone by now,” says Quinn.

Irish Water is finally preparing to build a treatment plant early next year near the original site proposed in 1988 on the north docks at the old Wallboard site at Ferrycarrig.

Approval has been secured, a contractor appointed and construction will begin “early next year” and take care of the needs of 36,000 people when it is completed.