Government will not seek rest of correspondence between Woulfe and Clarke 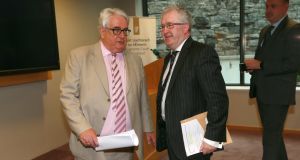 The Government will not ask the judiciary for additional correspondence which passed between the Chief Justice Frank Clarke and Supreme Court judge Séamus Woulfe over “Golfgate”, it has emerged.

Taoiseach Micheál Martin was asked by Opposition leaders last Friday to obtain all documentation exchanged between the two as the Oireachtas attempts to find a solution to the political and constitutional crisis that unfolded after the Chief Justice said he believed Mr Justice Woulfe should resign but the former attorney general refused to do so.

Three letters exchanged between Mr Justice Clarke and Mr Justice Woulfe on the affair were published by the Chief Justice last Monday.

Labour leader Alan Kelly said the full correspondence in relation to the “informal resolution” process initiated after Mr Justice Woulfe became embroiled in controversy over his attendance at an Oireachtas Golf Society dinner in Clifden last August must be made available if the Oireachtas is to make a considered judgment into seeking to impeach him or not.

A Government source said yesterday, however, that Mr Martin would not be in a position to request the additional documentation citing issues around the separation of powers.

It has also emerged that the Government will resist attempts by the Opposition to schedule a debate in the Dáil on the role of the Minister for Justice Helen McEntee in the nomination of Mr Justice Woulfe to the Supreme Court.

The Labour Party has asked the Oireachtas business committee to schedule time for a statement from Ms McEntee as early as tomorrow.

The Government will argue that such a debate would be “highly questionable” and could “prejudice other potential processes the Oireachtas may have to undertake regarding the Supreme Court”.

Last week, The Irish Times reported that a number of senior judges wrote to the Government to express interest in the Supreme Court vacancy filled by Mr Justice Woulfe, but the Cabinet was not told of their applications before he was selected in July.

A spokesman for Ms McEntee confirmed she considered expressions of interest from serving judges, and other judges eligible for the position, before recommending Mr Justice Woulfe to Cabinet on July 15th.

At present there is no debate on the issue scheduled for the Dáil this week but the Labour Party will pursue this today.

A Government source said Mr Justice Woulfe was recommended as a suitable candidate for the Supreme Court by the Judicial Appointments Advisory Board (JAAB), which is chaired by the Chief Justice.

“The appropriateness of a Dáil debate on an appointment process which involved the JAAB at a time when the Oireachtas may have to consider other issues around Séamus Woulfe and the Supreme Court would be highly questionable.

“Any such debate would inevitably touch on and potentially prejudice other potential processes the Oireachtas may have to undertake regarding the Supreme Court, as well as potentially encroach on the functions of the courts.

“It is a constitutional requirement that there is some distance between the branches of government. A Dáil debate on individual judicial nominations would also be inappropriate,” the source added.

A spokesman for Ms McEntee said “the scheduling of Dáil business is a matter for the business committee”.

Members of the People Before Profit group will also meet today (Monday) to give further consideration to potentially triggering an impeachment process in the Oireachtas. Some members of the group believe such a motion to be a “viable” solution but they also believe that the majority of the Government and Opposition will not support it.