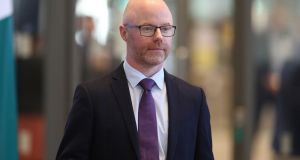 Minister for Health Stephen Donnelly. He said he wanted to see “implementation of integrated structural reforms to modernise and future-proof our health service”. Photograph Nick Bradshaw

Minister for Health Stephen Donnelly has signalled he wants to see significant improvement in services, the introduction of reforms and greater efficiency in spending arising from the major €3.5 billion increase in funding for the HSE next year.

In a 19-page letter to the chairman of the HSE board Ciarán Devane, the Minister said the “unprecedented level of investment” provided by the Government in the budget for 2021 should be used to increase capacity and permanent staffing levels, to progress the implementation of a number of national strategies and to advance the Sláintecare vision of universal healthcare.

Mr Donnelly said that in planning its services for next year the HSE should “continue to prioritise the provision of care in the home and in the community to the greatest degree possible”.

The Minister said he wanted to see “a minimum of 2,600 additional open and staffed beds in acute and community settings in 2021”.

He said the Government had provided funding for up 16,000 additional staff to be taken on in the health service.

The Minister said that in its forthcoming national service plan (its agreement with the Government on how the overall budget will be spent) the HSE should set out “estimates of the number of employees, by grade, category and service area, consistent with the net non-capital expenditure limits together with a monthly profile of whole-time equivalent posts and costs, an overview of the full year cost of the proposed recruitment, and details of the executive’s recruitment strategy to deliver on this major expansion of the workforce”.

The Minister also said he wanted to see a new “access to care action plan” published along with the HSE national service plan.

Mr Donnelly in his letter also said he wanted to see “implementation of integrated structural reforms to modernise and future-proof our health service”. He said while the number of community beds should increase, the amount provided directly by the HSE should either be maintained or raised.

He said a key priority would be to “protect vulnerable groups, service-users, patients, healthcare workers, and the wider public in the face of Covid-19 in line with national and international public health guidance, with a specific focus on ensuring that the health system is prepared to meet the emerging challenges”.

He wanted the HSE to deliver “increased levels of healthcare to our citizens in community and primary care settings”.

He said a total of 24.2 million home-care hours in 2021 should be provided, and that substantial progress should be made towards the full rollout of enhanced community services, community health networks and associated specialist teams across the country.

The letter said a minimum of 5 per cent of additional 2021 home-care hours should be provided for people living with dementia.

It said the budget for the Fair Deal nursing home scheme should be set at €1.062 billion next year, while the State Claims Agency should receive €410 million.

The letter said €21.1 million is being provided to the HSE to fund readiness work for Brexit. It says “this Brexit planning assumes no (or a very limited) EU-UK free trade agreement at the end of the transition period”.

“The funding is inclusive of a €4.7 million allocation for the proposed direct reimbursement scheme for Northern Ireland medical expenses which is being held back by the department pending the outcome of EU-UK negotiations and the ongoing review of the impact of Covid-19 travel restrictions on the proposed scheme.”

The Minister’s letter to the HSE chairman sets out his priorities for how the increase of€,534 million next year in net non-capital expenditure and €181 million on net capital expenditure over the original amounts provided in the 2020 budget should be spent.

The Minister’s formal letter on the budget, which was sent earlier this month, effectively starts the legal timeframe for the HSE to draw up its service plan for 2021, which has to be sent to Mr Donnelly by late November or early December.

The letter said the HSE is being provided with €20,371.5 million in non-capital funding and that in addition a further €261.6 million was being held by the Department of Health for specific new initiatives.

“There is significant scope for improved service delivery and reform within the totality of the net determination provided to the executive in 2021, alongside a continued focus on securing greater value-for-money and efficiency at a system level and the local procurement level.”