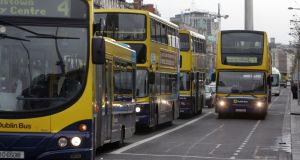 Hand sanitiser pilot schemes are underway on buses with a view to establishing whether they might constitute a slip hazard.

To date, sanitisers have been available at train stations but have not been accessible to the thousands of travellers who use the bus network, with the exception of dedicated school services.

The National Transport Authority (NTA) has said it is running pilot schemes on Dublin Bus, Bus Éireann and Go-Ahead Ireland services, as well as on Luas platforms.

They revealed details of the scheme to Sinn Féin TD Darren O’Rourke, who had written to the authority querying the absence of hygiene products on transport when they are readily available on entry to shops.

“The purpose of the pilots is to assist in assessing the safety concerns of such equipment from creating a slip hazard and other safety and operational concerns,” the NTA replied.

As well as bus and train stations, sanitiser has been available for users of Local Link buses on rural transport services.

Mr O’Rourke said he had been contacted by members of the public and by staff of transport providers in regard to the issue and would be following up on the outcome of the pilots.

“It is an anomaly that was raised with us. There are a lot of contact points on a bus and a Luas,” he said.

Public transport use has dropped dramatically during the pandemic and it has been discouraged by health officials keen to avoid any large public congregation. However, as people become increasingly relaxed about moving around in public, the issue of safe use is unavoidable.

Bus drivers last month said there was “mayhem” on some Dublin services over excessive numbers of passengers attempting to travel.

Bus Éireann is trialling sanitiser dispenser units on eight different bus and coach types across the country. A spokeswoman said the company has made it available at stations and in vending machines, and is regularly distributed to staff and drivers.