Councillors urged to approve deal for 850 houses in north Dublin

If sale of land in Santry to Glenveagh Homes is not approved, project will be ‘abandoned’ 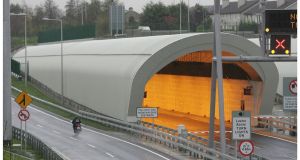 The proposed development is on Oscar Traynor Road in Santry, just east of the entrance to the Dublin Port Tunnel. Photograph: Alan Betson

Plans for more than 850 Dublin homes “will have to be abandoned” if city councillors refuse to approve the sale of land to a private developer, the council’s head of housing Brendan Kenny has warned.

The council has reached agreement with Glenveagh Living to build 853 social, affordable and private homes at Oscar Traynor Road in Santry, just east of the entrance to the Dublin Port Tunnel. However, the scheme cannot go ahead unless it is approved by councillors on Monday.

In January 2017 the councillors agreed plans for the redevelopment of council-owned lands at O’Devaney Gardens, St Michael’s Estate and Oscar Traynor Road.

St Michael’s Estate in Inchicore has been designated for the city’s first cost rental project for low and middle income workers. Last year councillors ratified a deal with developer Bartra for more than 800 homes on the site of O’Devaney Gardens close to the Phoenix Park in Dublin 7.

However, a substantial number of councillors opposed the O’Devaney deal, with considerable disquiet over the large number of private homes proposed for the council-owned site, with 50 per cent private, 30 per cent social and 20 per cent affordable purchase homes planned.

The deal was approved after Bartra offered to sell a percentage of the homes to the council or a nominated housing body for affordable rental.

Glenveagh will be paid for the social and affordable housing, but will pay the council €14 million for the land. The 17-acre site is currently on the vacant sites register with a value of €44 million.

However, Mr Kenny said the council is “achieving an agreement which realises the monetary value of the land in such a way as to satisfy the original vision for Oscar Traynor Road”.

If the councillors do not approve the deal “then unfortunately the Oscar Traynor Road project and this procurement process will have to be abandoned,” Mr Kenny said. “This would mean going totally ‘back to the drawing board’ and we realistically would estimate that it could be another five years before we would reach this stage again.”