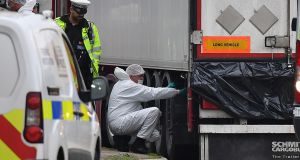 A mechanic accused over the deaths of 39 migrants has told jurors he had a “burner” phone for his four girlfriends, not smuggling.

Gheorghe Nica (43), is on trial at the Old Bailey in London charged with the manslaughter of the Vietnamese people who suffocated in a trailer en route to Essex from Belgium.

The British Romanian has admitted arranging onward transport for two successful runs but denied being involved in the tragedy on October 23rd last year.

The prosecution has alleged Nica was a key organiser who used “dirty” pay-as-you-go phones for his “dirty” business.

But giving evidence, Nica, of Basildon in Essex, denied it, saying he had an unregistered phone to contact four girlfriends in and around the London area.

The divorced father-of-three has claimed he was waiting for British passports to arrive when he was roped into people smuggling on two occasions by haulier boss Ronan Hughes.

Questioned about his phone, Nica said. “It’s the same with other people, I have girlfriends.”

Prosecutor Bill Emlyn Jones noted that whether or not Nica had four girlfriends, he would “still end up spending every night” with his friend Marius Draghici.

He said: “The use of [the phone] to make contact with these girlfriends of yours, are you saying that’s why you wanted in effect a burner phone?

“Were the girlfriends the reason for that?”

The prosecutor suggested Nica used the phone to arrange the shipment of migrants.

The defendant denied it, saying: “If I was in people smuggling business I would buy a new phone every time, which I did not.”

Nica had allegedly recruited him to pick up migrants in Essex on October 18th last year and drive them to south-east London in a van for £700.

In his evidence, Nica claimed that when he offered Calota the job, he told him it was a load of cigarettes, not people.

The prosecutor said: “That’s absolute rubbish, Mr Nica, you are lying to us.

“What if Mr Calota turns up and says I’m going to leave?

“With people – living breathing people – first of all you have got to get them out so they don’t suffocate and die. You need everything in place so nothing can go wrong.”

Nica insisted that if Calota had refused to do the job on the spot, then Hughes would have stepped in.

Mr Jones responded: “This is a lie that you are telling to try to help out your mate, Mr Calota.”

Jurors also heard that Nica called lorry driver Maurice Robinson, who discovered the bodies of the migrants after picking up the trailer at Purfleet early on October 23rd.

Nica told jurors: “I got in contact with Robinson three hours before the disaster.

“If I knew what’s going on, what job they have, I would never ever give him my number and say ‘listen, call me if you need me’.”

Mr Emlyn Jones said: “According to you, whose people are you helping to smuggle? Whose business is it? Who is making the money from it?”

Nica has admitted being involved in a people smuggling plot but denies 39 counts of manslaughter, along with Eamonn Harrison (23), of Co Down, who transported the trailer to Zeebrugge port.

Jurors have heard that Robinson (26), of Craigavon in Northern Ireland, and Hughes (41), of Co Armagh, have admitted the manslaughters. – PA