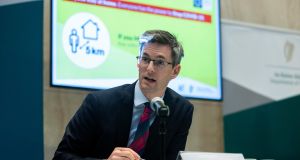 A senior medic has criticised “a selfish minority” of people for breaking public health rules by gathering in groups to drink alcohol on city streets.

Assistant chief medical officer Dr Ronan Glynn said their behaviour was demoralising for millions of others who were “doing the right thing” and protecting themselves against Covid-19.

Minister for Health Stephen Donnelly plans to bring proposals to Cabinet on Tuesday to ban takeaway pint and drink sales from pubs for the remainder of the Level 5 lockdown after footage of large-scale public drinking on streets in Dublin and elsewhere over the weekend came to light.

Dr Glynn said this behaviour was particularly frustrating and disheartening for the “silent majority” following the health advice, for the owners of businesses shuttered by Covid-19 restrictions and for older people who have been cocooning “for months”.

He admitted he did not have “specific evidence” linking takeaway alcohol sales to outbreaks. However, he said “the more that people do that, the more likely we’ll have cases and clusters”.

A further five deaths among Covid-19 patients were reported by the National Public Health Emergency Team (Nphet) on Monday evening. This brings to 1,984 the total number of deaths in the State from the disease. Nphet also reported 456 confirmed cases, bringing to 68,356 the total number recorded here.

Northern Ireland’s Department of Health on Monday reported 14 more deaths and 331 more cases in the previous 24 hours as politicians again clashed over the handling of Covid-19 restrictions.

Asked why the number of cases in the State was increasing again, Dr Glynn said “widespread” infections were occurring across the country in different settings.

“We are concerned the positive trajectory we had has at best stalled and is in fact deteriorating,” he said, adding that there was only a short time “to turn this around” by focusing on the basics of public health.

Some clusters have been linked to extended family or student get-togethers, he said: “It is more concerning that we can’t point to any one behaviour or any one group”.

He said Halloween, while well managed in many areas, could be a factor behind the increased case numbers.

There have been outbreaks in food processing plants and in construction, he said. In Limerick, a large outbreak in the hospital there had resulted in cases in the community, and “student activity” has also been linked to cases, Dr Glynn added.

One of the biggest single detriments to progress against the virus was the focus on what happens after six weeks of Level 5 restrictions end on December 1st, he said.

“We have to focus on today and tomorrow. I know people are tired.”

The take-up of the flu vaccine for children is just one-third of the target, chief nursing officer Rachel Kenna told the briefing.

The nasal vaccine, which is being offered free to children aged between two and 12, has a take-up of 20 per cent so far, compared to a target of 50-60 per cent.

Urging parents to get their children vaccinated, Ms Kenna said flu was very infectious and spreads easily. Children can develop serious complications from flu, and the vaccine can provide protection not just for them but the people around them, she said.

Dr Glynn described the announcement by Moderna that its vaccine in development may be almost 95 per cent effective as “promising” but said that ultimately “we need to wait for full data and to make sure vaccines are safe, durable, require boosters down the line, and to understand the requirements for implementing them”.

Taoiseach Micheál Martin earlier said a significant rollout of Covid-19 vaccines is unlikely to happen before the middle of next year and priority will initially be given to protecting vulnerable groups and healthcare workers.

Dr Glynn said “more than everything, we will have to overcome vaccine hesitancy” for such a programme to be a success.

“People are justifiably asking questions and it is important that we wait for the data and communicate with people when we have it,” he said.

This was the first time in history that an anti-vaccine campaign was being organised in advance of a vaccine being developed, he added.

“We can expect to be faced with disinformation and lies. Our job is to present the facts.”

While the development of new vaccines was reason for hope and optimism, he said it was too early for people to “drop their guard”.

On Monday, there were 274 hospitalised Covid-19 patients, including 33 in ICU. There have been 10 additional hospitalisation in the past 24 hours.

Donegal remains the county with the highest transmission of the disease, with a 14-day incidence of 269.5 cases per 100,000 people. This compares to a national incidence of 120.4.

There have been 52 deaths of patients with Covid-19 this month, compared to 119 in October and 36 in September.

Earlier, Nphet member Dr Mary Favier said the group would have “problems” with any proposal to open pubs at Christmas and that travel advice should not change in December.

Asked about reports that some members of Government favoured a two-week window for opening pubs over Christmas, Dr Favier said: “I think we’ve got problems with that if we’re going by the current circumstances.”

“I think we need to look very carefully at how that might be done. I was somewhat concerned and taken aback that the response to the drinking on the street was to open the pubs,” she said.

“I think as a society we need to be very cautious about our need to increase the consumption of alcohol, because we know it changes behaviours . . . we all let down our guard and that’s how the virus spreads. So I think we’ll need to have a very cautious approach to how alcohol is used over the next number of weeks.”

Dr Favier called for “very clear communications” from the Government over the coming weeks.

Asked about travel restrictions, Dr Favier suggested Nphet would seek to have the existing guidelines on travel maintained in December.

“I think the restrictions on travel are appropriate now and unfortunately they’re going to be appropriate in five/six weeks time over the Christmas period.

“The virus doesn’t know the boundaries of a festive season,” she said.