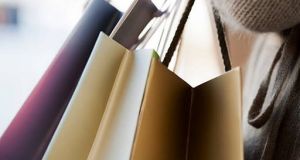 It is anticipated that that longer opening hours will see “crowd volumes dispersed throughout the day”. Photograph: Getty Images

Cities and towns across the State are reopening ahead of a Christmas shopping season which will see early morning and late night store openings, and a raft of new crowd-control measures imposed.

However, despite the challenges retail expert and TU Dublin academic Damien O’Reilly expressed confidence that shops and shoppers disciplined by 10 months of the pandemic would see the busiest shopping season of the year take place almost as normal.

“Retailers will be delighted to be open, and I think they will do whatever is needed to manage things because they won’t want to blemish their copybooks and have scenes of overcrowding and chaos seen around some pubs.”

Anticipating that footfall in the weeks ahead would be around 30 per cent down on a normal Christmas, Mr O’Reilly said the people that were shopping would be in the mood to spend money as pent up demand was unleashed.

He suggested that although retailers would manage crowds in shops a bigger challenge would be to manage streets.

“It might be easy to control the flow of people on to Grafton Street but somewhere like Henry Street will be harder, and if it gets very busy the numbers on the streets will have to be restricted.”

He stressed there had been “buy in from both retailers and shoppers, and everyone wants this to work. I think people will make decisions to steer clear of certain streets if they look too busy.”

He was also optimistic that longer opening hours would see “crowd volumes dispersed throughout the day”.

Dublin City Council said it would be placing “queueing icons on the ground in the main pedestrianised streets in the city centre and O’Connell Street”, and it called on retailers to take care “to ensure that appropriate social distancing is being observed in the on-street queue”.

It said if there was insufficient space to accommodate queueing demand “the retailer must take measures to prevent members of the public joining the queue”, and it called on them to consider operating “on an appointment-only basis, if possible, to assist the management of the city”.

A spokesman for Galway City Council said it had been working “closely with Galway Chamber, local businesses and other business groups in the city to ensure that Galway is a safe destination for shoppers this Christmas”, and he said queueing guidelines had been circulated.

In Cork, meanwhile, the council has been engaging with businesses and local agencies to ensure the reopening is safe and welcoming and follows public health advice.

“It is difficult to predict how shoppers and other consumers will react to the lifting of many of the restrictions which have affected them over the past six weeks,” a spokeswoman for the council said, adding that guidelines on social distancing and orderly queueing had been issued.

She said the council appreciated that retailers “may need to restrict access into their premises to ensure social distancing, and that there will be a requirement to queue on the public pavement. Understandably, this may pose problems initially for shoppers and businesses, but with everybody’s co-operation these can be greatly minimised.”

Many retailers will be operating extended hours, including some which are planning to open overnight on certain days.

A spokesman for Mandate, the union representing the retail sector, said staff were being asked to volunteer to work the anti-social hours “and they will be paid extra based on pre-existing agreements”.

David Gibney said his union supported the extension of opening hours, and said more dedicated hours for vulnerable groups should be introduced.

However, he warned that large crowds in town and city centres before Christmas “could lead to chaos, and we want to make sure staff are protected and not expected to manage queues inside and outside shops or to enforce the face mask rules. That is the job of management or security staff, and workers cannot be expected to police that.”