The Hunger: The Story of the Irish Famine isRTÉ’s first major project on the catastrophe 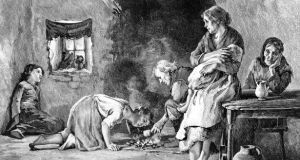 Interior of a peasant family’s hut during the Great Famine, 1845-1849. Illustration from The Life and Times of Queen Victoria, by Robert Wilson. Photograph: The Print Collector/Getty Images

The lengths to which Irish people went to stay alive including cannibalism have been detailed in a new documentary on the Great Famine.

Entitled The Hunger: The Story of the Irish Famine, it the first major documentary by RTÉ exclusively about the calamity and is being brought out to mark the 175th anniversary of its beginning in 1845.

Things became so bad in “Black 1847” with further famines in 1848 and 1849 that people were reduced to eating putrid pigs, donkeys and dogs.

There were also incidents of cannibalism recorded in counties Cork, Kerry, Galway and Mayo.

In 1849 Fr Peter Ward, the parish priest of Partry in Co Mayo, wrote to his archbishop: “In the village of Drimcaggy four were dead together in a poor hut- brother, two sisters, and daughter. The flesh was pulled off the daughter’s arm and mangled in the mouth of her poor dead mother-her name was Mary Kennedy.

“William Walsh, of Mount Partree, and his son were dead together, their flesh was torn off their dead bodies by rats, and by each other; flesh was found in their mouths. His wife and child died the week before of hunger.”

Prof Cormac Ó Gráda, a world authority on the Great Famine and its global impact, told the documentary: “Survivor cannibalism is trying to live on the corpses of people that predeceased you. They might be related to you or they might not.

“If you don’t believe that this happened or could happen then you don’t understand what famine is about.”

The documentary notes that the potato crop failed across northern Europe from Ireland to Prussia, but the total number of deaths from starvation between the years 1845 and 1852 was just 100,000 outside Ireland, compared with a million in Ireland.

Other countries diverted crops such as wheat and corn to feed their starving people. The British prime minister Sir Robert Peel did so in the early stages of the famine and nobody starved in 1845, but his government was brought down in 1846 over the corn laws and he was replaced by Sir John Russell, the Liberal prime minister, who believed in the principle of laissez-faire. The British government spent just £8 million out of total expenditure of £300 million on famine relief. By contrast they spent £14 million on security in Ireland.

The British government decided not to spend any more money from British taxpayers on famine relief and put the burden on landlords who were often going bankrupt themselves.

The documentary raises the issue of whether or not the Great Famine amounted to genocide - a view that has strong currency especially in the United States.

Its writer and director Ruán Magan said he wanted the documentary to focus not just on those who died or emigrated, but those who survived.

Many of them showed great charity to their fellow suffering Irish people, but others did not and one Catholic priest is quoted in the documentary as stating that Catholic landlords who evicted tenants were the worst.

Mr Magan, who made the Irish War of Independence series earlier this year, said there had been in the past “a great reluctance in Ireland to take on any of this big stuff”. *

“But a lot has changed since the commemorations of 2016. Now we are able to look back at things with a colder eye,” he said.

“You can blame the Brits, but maybe we need to take a look at ourselves too to see what happened.”

The Hunger: The Story of the Irish Famine airs on RTÉ One on November 30th and December 7th at 9.35pm.

*This article was amended on November 30th 2020