Dromoland Castle loses €50,000 in bookings in 48 hours over Covid rules 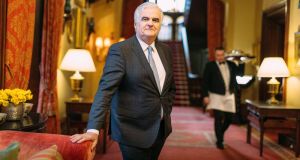 The general manager of the five-star Dromoland Castle in Co Clare has said the hotel lost €50,000 in bookings in the 48 hours after the Government announced last Friday that restrictions on inter-county travel would continue until December 18th.

Speaking on Monday, Mark Nolan said: “We have had a big washout of €50,000 of bookings in the past 48 hours for December.”

Mr Nolan stated that the hotel was planning to open on December 2nd “and have a reasonable level of business coming up to Christmas” but will now open only now at weekends until December 18th.

“Until December 18th, we are hoping that the Clare people will stay with us, but it is tough,” he said.

The resort is going through its second Covid-19 shutdown of 2020, and Mr Nolan said revenues would be down “a lot” this year on 2019.

“I am a long time in this business and I hope I never put a year down like this from everyone’s point of view. It is times like this when you realise what a fabulous team you have.”

Some 60 per cent of Dromoland’s business during a normal year is from the US, and Mr Nolan said the hotel achieved a 40 per cent occupancy during August as a result of staycationers.

“We got a pretty high room rate at around €400 per room per night during August. It is good to see that there is that ability in the Irish market to pay that for good-quality accommodation.”

The accounts include the performance of the nearby Inn at Dromoland hotel, and the group recorded a pretax profit of €7,558 after interest payments of €490,711.

Mr Nolan stated that the performance came after a four-year €20 million investment programme that made the “product much stronger, and we are able to yield higher room rates and that was the key to last year”.

Mr Nolan revealed that the hotel was projecting growth to return in the second half of next year, and will present his plans to the board on Friday with “about 14 caveats in there”.

“Nobody has got a crystal ball here. We are realists. We are going to try to do the best we can and be as creative as we can to keep going. We are reasonably upbeat and believe that we are over the worst. We will come through this – there are better days ahead.”

5 New rules on sale of alcohol come into force today