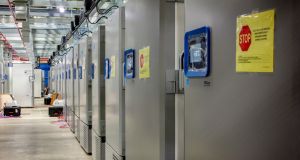 Storage freezers where vials of Covid-19 vaccine are to be stored at Pfizer’s facility in Portage, Michigan, USA. Photograph: Pfizer Handout/EPA

The resumption of normal life, even with a vaccine for Covid-19, will “still take some time”, a high-ranking Government official has said.

Liz Canavan, the assistant secretary general at the Department of the Taoiseach, said that notwithstanding recent positive news on the efficacy of vaccines under development, “it will still take some time before these will be rolled out to the extent that we can begin to resume our old normality”.

Ms Canavan said the Government is currently engaged in “scenario planning” for the rollout of the vaccine, determining the different storage, distribution and logistical issues associated with the various vaccines Ireland has signed up to.

“That all has to be looked at and then obviously we need to understand more about which vaccines are one dose or two dose,” she said. However, she added that the State had completed similar operations in the past.

“We have ways of delivering vaccines, we’ve done this many times before. So it really depends on the speed and the scale, and that we might have to do that or what different types of vaccines we might decide to use with different cohorts, so all that has to be planned out,” she said.

In the interim, she said that while vaccine developments “gives us hope, it doesn’t lessen the need to stick to the safe behaviours that I’ve spoken about, and that have served us well so far”.

She said that the time between now and when a vaccine is delivered should be spent “at as low a level of restrictions as possible while protecting the more vulnerable in our families and our communities. And the way to do this is to keep the numbers low.”

Elsewhere, the head of the GP committee of the Irish Medical Organisation has said general practitioners will be “ideally placed” to distribute the Covid-19 vaccine once it becomes available in Ireland as long as it is easily transportable.

Dr Denis McCauley acknowledged there continues to be capacity issues among GPs nationwide but said the vaccine rollout out would work because this is “a national emergency” .

“This is what we do, we are particularly good vaccine givers, when it comes to our efficiency at giving vaccines we can give several hundred in an afternoon, even up to a thousand if necessary,” he told RTÉ News at One .

As long as the selected vaccine is stable enough to be transported to surgeries around the country, GPs will be perfectly placed to vaccinate the local community, he said.

Moderna’s vaccine can be stored for up to six months at -20 degrees Celsius though it is expected to be stable for 30 days at normal fridge temperatures of 2 to 8 degrees while Pfizer’s must be kept ultra-cold temperatures of -70 degrees but can last in normal refrigeration for up to five days, or up to 15 days in a thermal shipping box. The Oxford/AstraZeneca vaccine being licensed can be stored at normal fridge temperatures.

Dr McCauley said GPs also have “a repository of information as to who are the people who need the vaccine.

Once you go beyond the healthcare workers who will be number one, all the other at risk groups and the targeted population, we have that information, we’re ideally placed in that regard.”

GPs can also play a role in convincing people to sign up for the vaccine, said Dr McCauley.

“We have to bring the public with us. If the vaccine is given by the local GP I think people will be more confident and more inclined to come.”

He added that the first distribution of vaccines would be straightforward, prioritising healthcare workers, the most vulnerable and people aged 80+. Deciding who gets the vaccine next may become more complicated and “’leave room for debate”.