‘The questions that demand answers around Pat’s murder are not going away,’ widow says 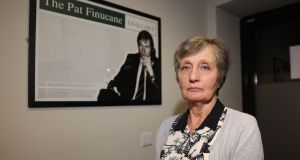 Geraldine Finucane, the widow of murdered solicitor Pat Finucane says the decision is ‘yet another insult added to a deep and lasting injury’. Photograph: Liam McBurney/PA Wire

The British government will not order a public inquiry into the murder of Belfast solicitor Pat Finucane in 1989, despite a Supreme Court ruling that its failure to properly investigate his killing was in breach of the European Convention on Human Rights.

Northern Secretary Brandon Lewis told the House of Commons on Monday that he had decided “not to establish a public inquiry at this time” but “I am not taking the possibility of a public inquiry off the table at this stage”.

It was “important”, he said, to allow Police Service of Northern Ireland (PSNI) and Police Ombudsman “processes to move forward, and that we avoid the risk of prejudicing any emerging conclusions from that work.

“I will consider all options available to me to meet the Government’s obligations,” he said.

The Finucane family has vowed to continue its campaign for a full public inquiry. “The questions that demand answers around Pat’s murder are not going away, and neither is our campaign for truth and justice,” Mr Finucane’s widow, Geraldine, said following the decision.

Mr Lewis’s proposal “falls so far short of what is required in this case that it beggars belief,” she said, and described it as “yet another insult added to a deep and lasting injury.”

Taoiseach Micheál Martin, said he was “disappointed” at the British government’s decision, which he said would “come as a further blow to Geraldine [Finucane] and her family, who have been pursuing truth and justice for three decades with great dignity.

Minister for Foreign Affairs Simon Coveney said the Government was “disappointment” at the UK’s failure to order a full public inquiry, and he had conveyed this to Mr Lewis.

He had made clear, he said, “that it remains the position of the Government that only through a full and independent public inquiry will a satisfactory resolution to this case be found.”

Pat Finucane, a 39-year-old lawyer, was shot dead by the Ulster Defence Association (UDA) as he ate dinner with his family and young children at their home in north Belfast in 1989.

Under the 2001 Weston Park agreement, the British government agreed to initiate a thorough, judge-led investigation into allegations that members of the security forces colluded in the murder.

David Cameron instead ordered a review of the Finucane case by lawyer Desmond de Silva, who found that “employees of the state actively furthered and facilitated his murder” but that there was “no over-arching state conspiracy”.

The UK supreme court ruled last year that there had never been an effective official investigation into Mr Finucane’s murder and that the government’s failure to do so was in breach of Article 2 of the ECHR, which protects the right to life. But the court said it was for the British government to decide if there should now be a public inquiry.

Outlining the reasons for his decision to the Commons on Monday, Mr Lewis said the levels of collusion in Mr Finucane’s murder were “totally unacceptable” and “unreservedly” reiterated an apology given by the former UK prime minister, David Cameron.

However, he said he believed the UK government’s legal obligation to carry out an investigation into Mr Finucane’s murder which was compliant with Article 2 of the European Convention on Human Rights could be met “through a series of processes”.

It was, he said, “in the public interest to allow the police and ombudsman processes to proceed before taking any decision on whether the state’s Article 2 (duty to investigate deaths) obligations have been discharged or whether further steps are required.”

Asked if he was certain that the course of action he outlined on Monday would fully discharge Britain’s obligations under the ECHR, Mr Lewis admitted that he was not.

Mr Finucane’s son John, the Sinn Féin MP for north Belfast, told reporters in Belfast immediately after the announcement that the family was “very angry” and the UK government’s decision was “astonishing, arrogant and cruel”.

Given they had waited 31 years for an effective investigation into his father’s murder, their proposals were “insulting” and “disgraceful”, he said, and what had been presented demonstrated that “the British government at every opportunity will continue to make the wrong decision and will put all of their efforts into ensuring that the truth about the murder of my father will not see the light of day and they are intent on suppressing that truth,” Mr Finucane said.

In a statement issued after the decision, the North’s Chief Constable, Simon Byrne, said it was the police’s view that there were “currently no new lines of inquiry” and the police “now need to decide if a further review is merited given all the previous investigations into this case.”

The five parties in the North’s Executive were split in their reaction to the decision, with condemnation from Sinn Féin, the SDLP and Alliance and support from the DUP and Ulster Unionists.

Jeffrey Donaldson, the DUP’s leader at Westminster, said that while they condemned Mr Finucane’s murder, all innocent victims were entitled to access to justice and to truth.

“What we really need is not special attention to any one case but a holistic approach to legacy that enables all innocent victims to have access to truth and justice,” he said.

Alliance MP Stephen Farry said it was a poor decision because the Finucane case raises serious questions about the rule of law, actions of the state and accountability. SDLP leader Colum Eastwood said Mr Lewis had let down Mr Finucane’s family and other victims of the Troubles.

“The British state murdered Pat Finucane and the secretary of state has failed miserably to do right by his family today. Does he realise that he is sending out a very clear message to all victims and the message is this: if you want the truth about what happened your loved ones, don’t come looking for it here,” he said.

Sinn Féin’s Northern leader and the North’s deputy first minister, Michelle O’Neill, said the Finucane family had been “shamefully denied a public inquiry and the justice and truth they deserve” and this decision “places the British Government on a long list of rogue states who are comfortable acting beyond the remit of the law.”

“What we must do now is establish and agree a legacy process which is fair, balanced, equitable and proportionate,” he said.

In the Commons, the Labour MP and shadow Northern Secretary, Louise Haigh MP, challenged Mr Lewis on his decision not order an immediate inquiry. “I note that he is not ruling a full public inquiry out in the future, why does he not grasp this opportunity to deliver it now?,” she asked.

“That this crime could happen at all in our country is shocking, that it has never been investigated to a lawful standard is unjustifiable and we have to ask ourselves, as we do with all legacy issues with The Troubles, do we accept a lesser standard of justice for citizens of Northern Ireland than we would if this terrible crime had happened in our constituencies?”