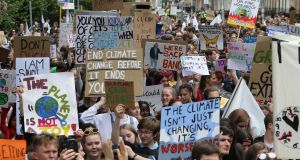 Activists taking part in a climate action protest in May 2019 in Dublin. Photograph: Nick Bradshaw /The Irish Times

The European Court of Human Rights has announced its decision to green-light an unprecedented climate case against 33 countries including Ireland.

The action being brought by a group of young people claims European governments “are categorically failing to enact the deep and urgent emissions cuts required to avert a climate catastrophe”.

The court’s “communication” of the case to defendant countries issued on Monday requires them to respond to the complaint filed by six youth applicants.

As the vast majority of cases filed with the Strasbourg court fail to reach this stage, the decision marks a major step towards a potential landmark judgment on climate change. The Court granted the complaint priority based on the “importance and urgency of the issues raised”.

The four children and two young adults from Portugal bringing this case are asking the court to hold the countries accountable for fuelling the climate crisis. Their complaint, filed with the support of the Global Legal Action Network (GLAN), centres on the rising threat which climate change poses to their lives and to their physical and mental wellbeing.

GLAN is a non-profit organisation that pursues legal actions across borders, challenging states and other powerful actors involved with human rights violations – it is based at the Irish Centre for Human Rights in NUI Galway.

If successful, the countries would be legally bound, not only to ramp up emissions cuts, but also to tackle their overseas contributions to climate disruption, including exports of fossil fuels, and those of multinational companies headquartered in their jurisdiction.

One of the applicants André Oliveira said: “It gives me lots of hope to know that the judges in the European Court of Human Rights recognise the urgency of our case. But what I’d like the most would be for European governments to immediately do what the scientists say is necessary to protect our future. Until they do this, we will keep on fighting with more determination than ever.”

In a list of questions sent by the court to the parties, it asked “whether the youth-applicants’ right under Article 3 of the European Convention on Human Rights was being violated”. It noted: “No one shall be subjected to torture or to inhuman or degrading treatment or punishment.”

This indicates the court believes climate impacts which the Portuguese youth face are so severe their right under this article is arguably being violated.

According to GLAN legal officer Gerry Liston: “These brave young people have cleared a major hurdle in their pursuit of a judgment which compels European governments to accelerate their climate mitigation efforts.”

This comes as the EU is about to decide on its 2030 emissions target, he noted. “Nothing less than a 65 per cent reduction by 2030 will be enough for the EU Member States to comply with their obligations to the youth-applicants and indeed countless others.”

Defendant countries are now required to respond to the youth applicants’ case by the end of February, unless a “friendly settlement” is reached. Applicants, their lawyers and experts will then respond to the defences of 33 countries. Like many high profile international climate cases, the action is being crowd-funded; in this case with the help of GLAN through its website.

Minister for Climate Eamon Ryan said: “The court’s decision to ask the 33 states to respond to the challenge from the Portuguese young people is a significant step in climate litigation, and a sign of the seriousness of the climate crisis. It underscores the need to increase our climate ambition and to do more to meet the targets we have already set.”

The case was filed in September after Portugal recorded its hottest July in 90 years. An expert report prepared for the case by Climate Analytics describes Portugal as a climate change “hotspot” set to endure increasingly deadly heat extremes where temperatures of over 40 degrees will last for more than 30 days at a time.

Four of the applicants live in Leiria, one of the regions worst-hit by the devastating forest fires which killed over 120 people in 2017. The remaining two live in Lisbon where during a heatwave in August 2018 a record of 44 degrees was set.

GLAN director Dr Gearóid Ó Cuinn said: “As only a tiny minority of cases filed with the European Court of Human Rights are fast-tracked and communicated, this development is highly significant. This is an appropriate response from the Court given the scale and imminence of the threat these young people face from the climate emergency.”

This case focuses on how states contribute to global emissions inside and outside their borders. On national emissions, European governments’ reduction efforts are too weak, the litigants contend, and not in line with what climate science demands.