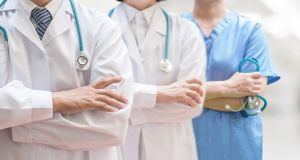 Public health specialists, who are playing a key role in dealing with the pandemic, are to hold three days of strikes in January in a dispute over pay and contracts.

Members of the Irish Medical Organisation (IMO), the doctors, who will hold the stoppages on January 14th , January 21st and 22nd, say they are prepared to escalate their action later. Last Friday, 94 per cent of them voted to strike.

The doctors, mostly female, insist they should enjoy better-paid, higher-ranked consultants posts , and complain that the Department of Health has avoided proper talks for the last five months.

Regardless of qualifications, no serving public health doctors has consultant rank, though the strike is not just about pay, said Dr Ina Kelly, who chairs the IMO’s public health committee.

“It really is time for Government to step up to the plate and recognise their own ethical obligations and to honour agreements,” she said, criticising the Government “misleading commentary” about the reasons for the dispute.

Minister for Health Stephen Donnelly said it was disappointing that a strike could happen during a pandemic, saying more progress had been made in five months than was previously made in years to settle the row.

The Department of Health said on Monday that it and the Minister were disappointed at the planned public health doctors’ strike.

It said the Minister hoped the issue of consultant status could be resolved through engagement and that industrial action could be avoided.

“The Department and HSE were working on the future framework for public health in recent months and have now finalised a detailed framework for a future public health model, to include consultant level roles, while also considering the important health protection requirements necessary in managing the current pandemic in the medium term.

The Department of Health has proposed to the Department of Public Expenditure that about 80 public health consultant posts should be created, filled by open competition, earning between €189,000 and €227,000 annually.