Anti-maskers: ‘Serve them and get them out as quickly as possible’

Mask compliance can create extra headaches for commuters and retailers as a minority flout the rules. 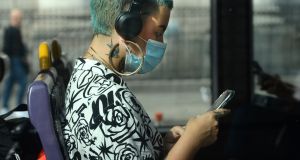 Face masks on the Luas: Near-total compliance on trams and Dublin Buses travelled on by The Irish Times, where the vast majority complied on boarding and during the journey. Photograph: Dara Mac Dónaill

Filling station worker Criodán Ó Murchú is “not actively encouraged” to enforce mask wearing. “Just two or three days ago a man came in without a mask and said he had a medical condition.

“I said, ‘Okay, if you’ve proof that’s fine.’ They just exploded and became very upset and irate and threatened me with legal action. So I just spelt my name slowly for his solicitor,” he told The Irish Times.

Mr Ó Murchú, who is six feet tall and practises martial arts, said such encounters do not overly concern him. “But then I think of my co-workers who are five foot, 50-year-old women.

“After eight o’clock when custom really dies off I wouldn’t think of asking someone to put on a mask because you’re just asking for trouble,” said Mullingar-based Ó Murchú, who is waiting to start a masters in chemistry.

Months into Covid-19 restrictions, and on the eve of reopening, there are signs that anti-mask activists are exploiting confusion surrounding equality legislation to avoid wearing face-coverings, relying on vague language in the regulations introduced in July and August.

Curiously, the issue is affecting shops more than public transport, where masks have been mandatory since July. “It’s not something that’s really coming up,” said Siptu’s transport sector organiser, John Murphy.

Last Tuesday, during rush hour, there was near total compliance on Luas trams and Dublin Buses travelled on by The Irish Times, where the vast majority complied on boarding and during the journey.

On one Red Line Luas travelling out of the city centre, 41 out of 42 adult passengers wore a mask. The one exception was a middle-aged Dublin woman who kept a mask in her bag.

“But then when they walk away I take it back off,” she said. “I don’t buy into it at all. It’s all just a ploy for the Government to control us. I’ve researched this.”

Those objecting to masks on principle, not on medical grounds or other allowable reasons, claim that they are being discriminated against. The tactics often work; many businesses have instructed staff not to confront people.

“Serve them. Serve them and get them out as quickly as possible,” said Vincent Jennings, chief executive of the Convenience Stores and Newsagents Association (CSNA), “I hate it with a passion but I know that otherwise we’re leaving ourselves far too open to somebody who thinks ‘I’ve got myself a nice clean legal action here.’”

Retailers will typically serve customers who refuse to wear a mask “because the alternative is getting into a potential dispute”, said Arnold Dillon, the director of the representative body Retail Ireland.

Tesco takes the same view, saying it reminds customers of their obligation to wear a face mask through signs and Tannoy announcements but “it is not our role to enforce these regulations”.

Masks became mandatory in shops in August. However, the onus is on the shopper, said the Department of Health. Businesses do not have an obligation to enforce the rule, but should take “reasonable steps” to engage with customers.

No one has been charged for failing to wear a mask. Last week, the Government introduced an on-the-spot fines system for non-mask-wearing, starting at €80 for a first offence. However the Garda is still waiting on additional regulations before implementing the new system.

Some anti-maskers are deliberately seeking confrontation, and then uploading video onto social media: “I’ve seen this happen quite a bit,” said Jennings. Thankfully, he said, they get very little support when they do so.

Now, they have taken to printing and distributing “mask exemption forms”. Earlier this month, anti-mask protester Dolores Webster handed out 500 such documents, stating that refusal of services to non-mask wearers is a breach of the Equality Act 2010 (a law which does not exist on the Irish statute books).

A day later, an anti-mask activist entered Supervalu in Ballymun with a similar notice. A staff member offered him a free mask and urged him to wear it to protect other customers. The man refused and accused the worker of discriminating against him, according to footage uploaded online.

The man claimed he was then arrested for not wearing a mask. A Garda spokesman said he was arrested for a public order offence.

The problem, said Vincent Jennings, is the Irish legislation is vague, allowing for exemptions for children, people with mental or physical disabilities and people for whom wearing a mask would cause “severe distress”.

This third category is too broad, he argued: “This is what is being used by the anti-mask brigade. They’re saying ‘extreme distress’ is a disability. And the Department of Health will not give me a straight answer of whether it is or not.”

Despite the worries of business owners, such arguments are unlikely to hold water in courts according to equality law barrister Claire Bruton. She said potential claimants would need to have a medical condition that met the legal definition of disability.

“If there’s no proof given of the disability, it’s my view it would be difficult for a complainant to establish a disability before the Workplace Relations Commission in a claim under the Equal Status Acts,” she said. A claim of “severe distress” would not count.

Most retail workers who spoke to The Irish Times said the number refusing to wear masks on ideological grounds remains very small. However, it did increase during the Level 5 restrictions.

“We had the highest amount of mask-wearers during Level 3, a good 80 plus percent. But then as we moved into Level 5 the amount not wearing them increased, and there has been a growing number of customers vehemently against wearing one,” said Mr Ó Murchú.