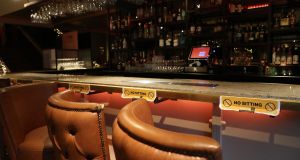 Anyone looking for a dinner reservation in the run-up to Christmas may already have left it too late as a surge in bookings ahead of restaurants reopening this weekend points to pent-up demand amongst people anxious to eat food cooked by others somewhere other than their own kitchens.

The online booking engine OpenTable shows little availability for restaurants in Dublin between the hours of 7 and 9pm between Thursdays and Sundays in the run-up to Christmas with many only offering timeslots as early as 5:30pm for dinner reservations.

She said she had the restaurant phones diverted to her mobile during the lockdown and as soon as the Taoiseach Micheál Martin confirmed on Friday that restaurants would be allowed to re-open this weekend her phone started ringing. “It has been ringing ever since,” she said.

Restaurants have been closed except for take-away across the State for the past six weeks and closed to indoor dining since October 6th. For Dublin restaurants indoor dining has been banned for more than two months, since September 19th.

Ms McBrien told The Irish Times she had taken 170 bookings for lunch and dinner on both Friday and Saturday. “Demand is really strong and we have so many regulars and locals so it is looking good,” she said.

She admitted to being more nervous about December trading then she was this summer with Christmas festivities and “talk about being locked down again in the new year” likely to see some people going overboard although she expressed confidence her team would be able to keep things moving smoothly.

The executive chef of Dublin restaurants Sole on South William St and Fire on Dawson St Richie Wilson said there had been a huge level of bookings. “The demand is there but we don’t have the tables because of space restrictions,” he said

“When you take out 40 per cent of the tables there will always issues getting a table. We are pretty much fully booked for Thursdays, Fridays and Saturdays between now and Christmas although there will be some cancellations so I would not like to discourage people from getting in touch.”

He pointed to a “ whole different set of challenges” facing the sector this year. “In Christmases past people would meet up in the pub and come to the restaurant together or come from offices but now they will all be arriving separately so delays in seating and serving people are inevitable,” he said.

He also highlighted potential problems if people have to leave restaurants by 11pm. “I think having the same closing time for all restaurants could see large crowds on the street after that and long queues at taxi ranks.”

Oliver Dunne owns a string of restaurants including Cleaver East and Steak and Lobster in Dublin City centre, Bon Appetite in Malahide as well as restaurants in Galway and Drogheda.

He said the Malahide restaurant where he started out is set to have “the busiest December it has ever had” while the city centre restaurants were busy on weekends things were looking quieter mid-week although the level of inquiries was extremely high.

He said he had three staff handling booking queries but even then they were struggling to keep up.

Sharon Shevlin of Chapter One was upbeat ahead of the Michelin starred restaurant reopening. “We opened the bookings in September and historically it always fills but it filled quicker this year,” she said.

“We won’t have the large office parties that we usually get in December but we have a lot of people who back to us every year, families and small groups and we are looking forward to seeing them again this Christmas too.”