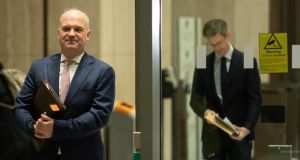 Families planning to meet elderly relatives over Christmas should plan ahead by ensuring they stop socialising now, public health officials have advised.

“Now is not the time to be socialising with friends,” according to deputy chief medical officer Dr Ronan Glynn, who warned of “significant issues” if this happens.

“Just because you can do things tomorrow doesn’t mean you should,” he told a National Public Health Emergency Team briefing on Monday.

Case numbers will rise again if there is an increase in socialising, and we “don’t do everything we can to drive down our number of contacts”.

The GAA as an organisation is not responsible for the spread of the virus, Dr Holohan told the briefing.

Asked about the conclusion by Government-appointed consultants EY that post-match celebrations of some GAA county finals coincided with an increase in infection, he said “lots of things” had contributed to the local spread of the disease.

Through the summer, there was an increase in socialisation and it was “not right” to pick out any specific sporting or other organisation in relation to this.

Everyone “relaxed” and socialised more during the summer but some activities were the subject of higher-profile reporting, he said.

Alcohol was a significant common factor in a lot of social experiences in which transmission occurred. The GAA had been identified as an organisation responsible for the spread of infection because of the “high-profile nature of some incidents” but “this isn’t the case”.

Everyone has the power to take responsibility for their own lives by adhering to “straightforward” public health advice, he advised.

Ireland would be experiencing an additional 35 deaths a day if the patterns seen in the rest of Europe during the second surge occurred here, Dr Holohan said. This compares with an average of 90-100 deaths a day from all causes.

He said the burden of infection in the Republic was one-third of that in Northern Ireland.

Dr Holohan said significant progress was made during the six weeks of Level 5 restrictions. Daily case numbers fell from 1,200 to an average of 277; the 14-day incidence dropped from a high of 307 cases per 100,000 people to 89.

However, outbreaks in healthcare settings have persisted, as has a high incidence of the disease among older people, he said.

Asked whether the measures were justified, Dr Holohan said there had been a significant reduction in the burden of infection, while hospital services had been protected “for the most part”.

In addition, education and childcare services had remained open.

“In a very significant way, we have managed to achieve our objectives, in a way other countries in Europe have not been able to.”

Dr Holohan said Nphet would like the daily case figures to be lower and it was hoping that the “benefits” of Level 5 would continue to be seen in the form of reducing cases over the next seven to 10 days.

If people kept up their commitment to public health measures there was no reason why significant suppression of the virus could not be achieved.

One further death of a patient with Covid-19 was reported by the National Public Health Emergency Team. This brings to 2,053 the total number of virus deaths in the pandemic.

Nphet also reported 306 confirmed cases of the disease, bringing to 72,544 the total number of cases in the Republic since February.

On Monday afternoon, there were 244 Covid-19 patients in hospital, including 31 in ICU. Three further hospitalisations occurred in the previous 24 hours.

The five-day moving average for daily cases at the end of the six-week period of Level 5 restrictions is 277, compared with the target of public health officials of 50-100.

Six counties recorded an increase in cases in the past week, while in 20 the trend was downwards.

So far this month, 119 Covid-19 patients have died, the same figure as in October; 37 patients died in September.

There have been 38 deaths in hospitals linked to virus outbreaks, compared with 23 in October and seven in September.

There are 61 open outbreaks in 25 hospitals, with 910 linked cases. Of these cases, 409 are healthcare workers and 501 are patients.

In nursing homes, there are 35 open investigations into outbreaks, associated with 908 cases. There were 38 nursing home deaths in November, 48 in October and 12 in September.