Most payphone calls are to domestic violence and homeless shelters, says ComReg 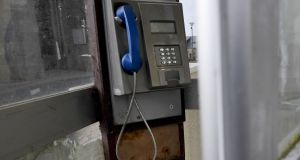 A decade ago, there were almost 4,000 payphones in Ireland. Photograph: Fred Tanneau/AFP/Getty Images

The number of public payphones in Ireland continues to plummet with just 468 left, compared to close to 4,000 little more than a decade ago.

Usage of the payphones that remain has fallen even more dramatically with a 99 per cent decline in calls being made over a broadly similar timeframe because of the proliferation of mobile phones.

In 2008 there were more than 3,500 payphones in the Republic but that number fell sharply the following year as part of a major rationalisation programme which saw the company, then trading as Eircom, take almost 2,000 out of service.

Since then numbers have continued to decline with two dozen phones permanently removed from the network over the last 12 months.

Eir maintains the phones under a Universal Service Obligation (USO) and will only remove them if they have been used for an average of less than one minute each day over a six-month period or if there is evidence of anti-social behaviour.

The decline in usage and the costs associated with maintaining the public network has meant the company has repeatedly sought permission from the communications regulator to scrap them.

While ComReg does acknowledge the relevance of the payphone has diminished, it says most calls made from them are to freephone numbers including domestic violence agencies and homeless shelters.

Call volumes have also fallen steeply in recent years. A decade ago in excess of one million calls were made from payphones each year compared with 105,554 over the last 12 months – an average of 283 calls each day from the whole network.

Dubliners are most likely to use payphones with 43 of the 50 most popular payphones found in the capital. Such phones appear disproportionately popular in Kerry, as four of top 50 can be found in Killarney. By contrast, Cork and Galway have just one phone each in the top 50. Leitrim is the only county without any payphones.

The first Telefón box was installed on Dublin’s Dawson St in 1925 and they started to proliferate around the city seven years later as the Eucharistic Congress came to town, after which they spread across the State. For decades they were the only means by which most people could communicate with people living outside their locality; until the late 1990s, queues outside phone boxes were a common sight.