Irishman held in US prepares to spend weeks behind bars, says father

Keith Byrne detained by US immigrations officials on way to work 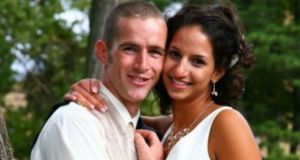 Keith Byrne with his wife Keran. Mr Byrne is ‘very, very down’, his father Jim has said

An Irishman jailed in the US while trying to secure citizenship is preparing to spend weeks behind bars after refusing to sign a form that would have allowed his deportation to Ireland within days, according to his father.

Keith Byrne is “very, very down” but is refusing to sign the waiver that would have seen him put on a plane back to Ireland within 48 hours, his father Jim has said.

Mr Byrne spoke with his son on the telephone on Saturday. He is being held in the Pike County Correctional Facility, in Pennsylvania after he was detained by US immigration officials this week.

“He is very, very down,” Mr Byrne said after talking to his son. “He keeps apologising for having put his family in such straits, saying it is all his fault. He blames himself. He said he made a stupid mistake 15 years ago and he is paying for it now.”

Keith (37) from Fermoy, Co Cork, was arrested by US Immigration and Custom Enforcement (ICE) officers in Montgomery County, outside Philadelphia, while travelling to work - a painting and decorating business he has built up over the last five years - on Wednesday.

The father-of-three’s family say he has been living and working legally in the US since 2007 but lost a recent appeal against a refusal to grant him residency because of two separate charges of personal use of cannabis on his record from when he was younger in Ireland.

“It was only a stupid error he made - he got fined, for God’s sake,” his father Jim told The Irish Times.

“And, now, he is paying the ultimate price.”

Officials asked Mr Byrne in prison to sign a form in recent days which would have him deported to Ireland within 48 hours, but he refused and will have to remain locked up until he is seen by a judge, his father said.

He expects this could prolong the process by two or three weeks.

“Keith has a hell of a lot to fight for - he has an awful lot to lose,” he added.

Mr Byrne has phoned his father every weekend since going to the US in 2007 - “I’ve often cursed him on a Sunday for phoning me when the match is on.” - and was always “happy and jolly” about the life he had built for himself and his family, his father said.

Being forced to return to Ireland would “devastate” his family and “destroy” his business.

“He was getting on great. He gave his first party in his new house for the 4th of July this year - he was living the American dream really,” he said.

“He had spent a lot of time on the house, he was sending me pictures of all the work he was doing to it. He didn’t expect this. He had high hopes he would get a Green Card. A friend of his who was there 15 or 16 years eventually got a Green Card and that really boosted Keith.”

Mr Byrne’s father said he was worried about his son having to return to Ireland.

Mr Byrne’s mother Mary was in a car accident late last year and is still getting hospital treatment for her injuries.

“This is the last thing she needed. She is not taking this well,” he said.

Mr Byrne’s family in Fermoy are to meet with local TD Sean Sherlock on Monday.

Mr Sherlock has called on Tánaiste and Minister for Foreign Affairs Simon Coveney as well as the Government to “urgently” intervene to seek Mr Byrne’s release and return to his family.

“His case highlights the precariousness of Irish people who have settled in the US, who have no legal status but who are contributing to society,” said Mr Sherlock.

“It is vital that his case is raised at the highest political level to seek to have him released on humanitarian grounds.

“He poses no threat to anyone. His wife and children are beside themselves with worry. A political intervention by the Minister for Foreign Affairs would certainly assist matters at this stage. “

Mr Byrne’s family contend that he was never an undocumented immigrant, and when his visa expired he alerted authorities with a view to regularising his situation.