Noel Whelan ‘was a force in the world who never wasted a day,’ funeral Mass hears

Barrister and commentator driven by ‘passion for democracy and fair, equal society’ 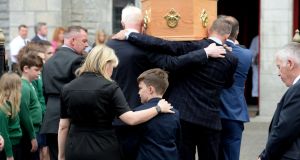 Sinead McSweeney and her son Séamus follow the remains of husband and father Noel Whelan at the Church of the Holy Name in Ranelagh. Photograph: Alan Betson/The Irish Times

Political commentator and barrister Noel Whelan was a “force in the world” who “never wasted a day”, his funeral Mass has heard.

Sinéad McSweeney described her husband as someone who had an acute and highly attuned sense of fairness and justice which permeated his legal work.

He was heavily involved in recent referendum campaigns to save the Seanad, introduce same-sex marriage and abolish the Eighth Amendment to the Constitution.

Speaking at his funeral Mass at the Church of the Holy Name in Ranelagh on Saturday, Ms McSweeney said her husband’s politics in recent years was driven by a passion for strong democracy, healthy, constructive and effective politics and a fair, just and equal society. That was what brought him to work on the Seanad and marriage referendums and the Together for Yes campaign, she said.

An Irish Times columnist, author and a former advisor for Fianna Fáil, Mr Whelan ran for the party as a general election candidate for the Dublin South East constituency in 1997. He took silk in 2018, becoming a senior counsel after practising as a barrister for 19 years in Dublin, Wexford and Waterford.

Ms McSweeney, who is vice president of public policy and communications for Twitter in Europe, said her husband had “boundless energy. Sometimes that was exhausting for those of us around him, as he expected us all to make decisions and move at the same pace as he did”.

“He was an absolute tower of strength and the person to whom everyone turned when they had a problem.

“And as a man not short of opinions, Noel was rarely lost for a solution or an answer,” she said.

Speaking of the love Mr Whelan had for her and their 10-year-old Séamus, Ms McSweeney said, “Séamus and I never doubted the depth and strength of Noel’s love for us. We are who we are because Noel knew and loved us”.

She said the family has a “treasure trove” of memories that will sustain them into the future.

"Noel loved parties and loved gatherings, and if we didn't have an occasion in our own lives to justify a party, he'd offer to throw a party for someone else to mark an occasion in their life," she said.

My favourite and most cherished column of Noel's.

Have I told you lately it's okay to like princesses? https://t.co/OARTfumz1L

"His favourite saying was that it was really interesting to throw a party with someone else's guest list."

Ms McSweeney said it was an "immense source of strength and comfort" to her and their son Séamus, as well as Mr Whelan's mother Myra and siblings, to "see such a clear demonstration of the breadth and depth of Noel's impact, the lives he touched and the friendships he made along the way."

Fr Derek Smyth told the Funeral Mass the longer you knew Mr Whelan "the more you realised how remarkable a man he was, how devoted he was to his family, how loyal he was to his friends and how available he was, literally, to anyone who needed him."

"Through Noel, the landscape of this country has been changed forever," he said.

"He ached to make this world and our country a better place and when he identified oppression or the marginalisation of groups or individuals, whether it came from Church or State, he committed all his skills and energies towards the rectification of such wrongs," he said.

"And, the application of his razor sharp intellect, his ability to penetrate to the core of any problem, identify the pitfalls, pierce through the confusion, clarify the challenges, was a force to be reckoned with."

Mr Whelan was "altruistic to the core", he added, adding that he used "his massive heart and intellect to the benefit of others."

"Noel was grateful, grateful for the ordinary things: a simple meal, good conversation, love of family and friends, a book, a sunset," he said.

"He used his strength and deep feeling to care for others and he had a wonderful sense of humour."

Uniformed school children from Scoil Bhríde, attended by Séamus, formed a guard of honour outside the entrance to the church, just streets away from Mr Whelan’s family home in Ranelagh, as his coffin arrived for the funeral Mass.

Among gifts brought to the altar were a a picture of his parents - Séamus and Myra - symbolising his homeplace of Ballycullane in Co Wexford and his love for family, as well as a copy of the political manual The Tallyman’s Guide, representing his lifelong passion for politics.

A copy of the programme from this year’s Kennedy Summer School in New Ross, Co Wexford, which Mr Whelan founded was also brought to the altar. The funeral Mass heard he was passionate about its growth and “was still directing operations from his hospital bed last Monday.”

A copy of a book he co-wrote, Ireland Says Yes, was a tribute to his work on the marriage equality referendum campaign.

Mark Hennessy, news editor of The Irish Times and friend of Mr Whelan and Ms McSweeney, carried to the altar a copy of Saturday’s edition of the newspaper.

Close friend, Neil McCarthy said it was “not just because Noel wrote a column for the paper, but because Noel lived for news and when he wasn’t writing he was reading.”

Mr Whelan grew up in a family of 12 and was raised in a small rural post office in Ballycullane. He was buried at Ballycullane cemetery in Co Wexford.

There was standing room only for the large crowd of mourners and many listened to the Mass from outside.

Speaking of the cross-section of leading figures from politics, the law and the media among Mr Whelan's family and friends, Ms McSweeney said: "If he was here himself, he'd say: 'That's some guest list'."