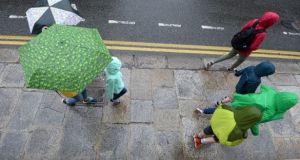 People should make the best of the warm and sunny conditions on Sunday and Monday as a cold front from Iceland is on the horizon and will bring colder, wetter weather to our shores from the middle of the week.

While no temperature records will be broken during the current warm spell, with the mercury unlikely to climb higher than 24 degrees, there will be long spells of unbroken sunshine Sunday while Monday will see similarly pleasant conditions.

The warmest places in Ireland on Sunday are inland parts of Cork and Kerry where temperatures will touch 25 degrees.

There will be a subtle shift overnight as southerly winds will make it seem a little colder in Munster on Monday while the eastern part of the country will be warmest.

“Today is likely to be the best day of the current weather spell and while there won’t be any exceptional temperatures there will be a lot of sunshine,” Met Éireann forecaster Deirdre Lowe said.

She added that by lunchtime the highest temperature recorded was about 22 degrees in southern parts of the country and was set to rise by around three degrees as the afternoon progressed with the warmest places likely to be in Cork and Kerry.

The increased cloud cover will increase the chances of occasional showers, particularly in the eastern and northern parts of the country on Monday and Tuesday.

After that it will most likely be as you are with a cold front sweeping in from the north Atlantic bringing more traditional Irish summer weather with it.

Wednesday will be cloudy with rain in the west spreading gradually further eastwards during the day. The rain will turn persistent as the afternoon progresses particularly in the west and northwest with temperatures ranging from 18 to 21 degrees.

It will be colder on Thursday and while the rain will be confined to scattered showers, some heavy or prolonged in the north, temperatures will struggle to get out of the teens with the same conditions likely on Friday.

“There will be a lot of fresher weather from the middle of the week with more showery conditions,” Ms Lowe said. “It is looking quite changeable from then on and the weekend is likely to be a typical Irish summer’s weekend. There is certainly is no heatwave in sight.”