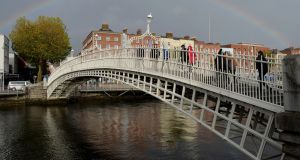 Bollards designed to deter terror attacks are set to be installed as part of plans for a new civic plaza for the north side of Dublin beside the Ha’penny Bridge.

A planned water feature incorporating a line of water jets, or mini fountains, has been scrapped, however.

The council said it will not submit plans for the Liffey Street plaza to the planning board. Developer Noel Smyth, chairman of Dublin City Centre Traders Alliance, said the council will face legal action if it tries to bypass the board.

Plans drawn up by DHB Architects for the council earlier this year proposed the pedestrianisation of Liffey Street between Strand Street and the quays, with the water feature outside the Woollen Mills cafe.

The remainder of Liffey Street Lower and all of Liffey Street Upper, which runs from Abbey Street to Henry Street, will be upgraded to create a more “pedestrian-friendly” environment, with benches, bicycle stands and trees.

Traffic on Abbey Street, including cars exiting the Arnotts car park, would no longer be able to access the quays via Liffey Street Lower, but would instead have to turn right into Strand Street and continue to Capel Street to reach the quayside at Grattan Bridge, resulting in a detour of more than half a kilometre to reach Bachelors Walk. Deliveries would be allowed between 5.30am and 11am.

However the council has decided the water feature would be “visually incongruous” as well as potentially “impeding to the movement of pedestrians”. Concerns were also raised that it would not be well maintained.

Unlike previous pedestrianisation schemes in the city, which are governed by signage, the Liffey Street scheme would install “anti-hostile bollards”, which are used to deter terror attacks by physically blocking access to the street. These bollards can be lowered automatically during delivery times or to allow access for emergency vehicles.

The council said it intends to pursue the scheme within its internal planning process by seeking approval from councillors in the coming months.

However, Mr Smyth said the council must submit the plan to An Bord Pleanála. “The council can’t just ignore the planning process. Should they take the law into their own hands we would have no alternative but to take any steps available to us, including taking out an injunction against this.”

The alliance of which Mr Smyth is part, which includes the owners of Arnotts, Brown Thomas, the Jervis and Ilac shopping centres, as well as car parks in the city centre, was set up to oppose plans for the College Green plaza, and had threatened legal action if the council did not submit the College Green plans to the board.

“We would say to the council, you tried to do this with the College Green Plaza, please don’t do it again,” Mr Smyth said.

The council said it had undertaken an assessment of the plan which would have a “limited impact on traffic movements” it said that they were not of sufficient significance to warrant an application to the board.

The north/south route across the Ha’penny Bridge had one of the “busiest pedestrian flows in the city” it said and it noted that up to 35,000 pedestrians used Liffey Street daily compared to 1,000 cars.