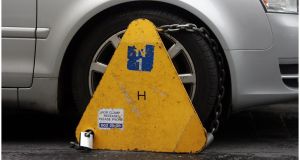 Earlier this year, the National Transport Authority revealed it was hiring extra staff to cope with the volume of appeals cases against private clampers coming before it. Photograph: Bryan O’Brien

The National Transport Authority (NTA) is ordering a countrywide inspection of parking zones after receiving hundreds of complaints that signs are not clearly warning motorists their cars could be clamped.

Consultants are being hired, at a cost of €150,000, to carry out the audit into whether clamping signs comply with the law, which states they must be “prominent” and “indicate clearly” that private clampers are operating in the area.

Last year, more than 300 motorists argued signs were inadequate in appeals or complaints to the NTA about being clamped.

Four in every 10 appeals against clampers were upheld last year.

The authority, which acts as the State regulator for parking and clamping operators, said the most common reasons for upheld appeals were inadequate signs, errors on clamping notices, motorists having proof of payment and motorist errors in inputting registration numbers.

It is expected the consultants will take two years inspecting clamping zones around the country before drawing up a “comprehensive report” to the NTA detailing the level of compliance with the law.

Under the legislation, signs have to be clearly readable, “in plain language”, clean and in good condition.

They must also be properly positioned, of a certain size and must clearly state terms and conditions, including the clamp release charge and any additional charges.

The State transport authority is also looking for “general advice and assistance” from the consultants, who have yet to be appointed, on trends and patterns in inadequate clamping signage nationally.

An NTA spokesman said it was hoped the two-year audit will lead to “clearer communication to motorists of the rules associated with parking in clamping places and the consequences of non-compliance with same”.

The Vehicle Clamping Act 2015 and the Vehicle Clamping and Signage Regulations 2017 both lay down the responsibilities of parking operators to clearly warn motorists that their car is at risk of being clamped in designated zones.

The NTA has the power to order parking operators to improve their signage so that it is in keeping with the law.

Earlier this year, the transport authority revealed it was hiring extra staff to cope with the volume of appeals cases against private clampers coming before it.

There is a “two-stage appeals process” against car clamping: firstly to the car park operator, with a second and ultimate appeal to be made to the authority within 30 days of the original rejection.

The authority dealt with 1,783 second-stage appeals last year, a rate of almost five every day. Of these, 728, or 40 per cent, were upheld.