One patient unconditionally discharged from Central Mental Hospital in 2018 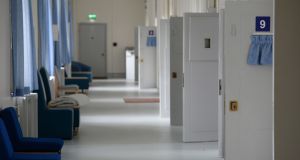 Just one person was completely discharged from the care of the Central Mental Hospital (CMH) last year.

The vast majority of patients in the CMH in Dundrum, Co Dublin, have been convicted or are awaiting trial for criminal offences. A small number have not been convicted of a crime and were sent to the hospital from other psychiatric facilities because of their violent or aggressive behaviour.

The CMH detains and treats people who have committed offences but have been found not guilty by reason of insanity by the courts.

Patients are held in the secure facility until deemed well enough by the Mental Health (Criminal Law) Review Board to return to the community.

Some patients spend decades in the facility, often far longer than the average length of a life sentence. Some are unlikely ever to be released.

In 2018, the board received three applications from patients for unconditional discharge from the care of the CMH. All three patients were already back living in the community but under the supervision of the hospital.

The board granted one application and refused another, according to its latest annual report. The third was adjourned for consideration this year.

A small number of patients, including two in 2017 and one in 2018, have been unconditionally discharged from the CMH since 2006 when new laws governing the review process were introduced.

Last year, the review board agreed to conditionally release a further six patients into the community where they will remain under strict supervision.

The six patients had spent an average of 10 years in the CMH, with two spending 15 years there.

The length of time spent in the CMH has no bearing on whether a patient will be released or not, the board stated.

The board, which is chaired by retired High Court judge Iarfhlaith O’Neill, reviewed 89 patients in 2018, 10 of whom were female.

The most common primary illness was schizophrenia (67 per cent) followed by schizoaffective disorder (17 per cent). The remainder suffered from a wider variety of illness or disorders including bipolar affective disorder, psychotic depression and psychosis.

Thirty seven of the 89 patients had committed or were alleged to have committed murder. In 30 cases the deceased was known to the patient and in 22 cases they were a family member.

The board also raised concerns about waiting lists in the CMH for therapeutic programmes.

Board members raised the issue with CMH clinical director Prof Harry Kennedy who told them it was a “resource issue” due to a shortage of staff.

“The Board would like to emphasise its view of the importance of active participation by patients in therapeutic programmes in a timely manner,” it wrote.

There is currently a significant waiting list for a bed in the CMH, made up mainly of prisoners in Cloverhill Prison who suffer from severe mental illness.

Ireland has only two beds for forensic patients per 100,000 people, a fifth of the UK figure. This will rise to about 3.5 beds per 100,000 when the CMH moves to a new facility in north Co Dublin next year.