Higgins is no dark horse amid fawning crowds in Ballinasloe

Men with stout sticks, women and children were spellbound as he spoke from the ‘gig rig’ 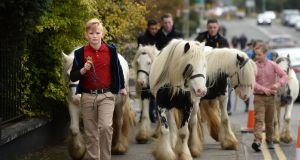 A horse named “Bullet” took six days to get from Dublin to the oldest fair in Europe, just in time for its opening by President Michael D Higgins.

“Michael D, my old pal !” the pony’s owner, Christopher Gunning, roared from his trap as the President and his wife Sabina approached the fairgreen in Ballinasloe, Co Galway, on Sunday.

It was an irresistible invitation. There ensued a five-minute conversation between Mr Higgins and Gunning about horse dealer Miley Cash, and about the price of equine feed, and more.

A delighted Gunning took his hat off to the president – literally – and placed it on his head.

Quick as a flash, Mr Higgins handed it back to its slightly follically challenged owner.

“You need it more than me,” the president laughed.

One of Ballinasloe’s oft-challenged myths is that Napoleon bought a warhorse here. If Mr Higgins was the French emperor himself he couldn’t have elicited a warmer reception.

Men with stout sticks and women and children were spellbound as he spoke from the “gig rig”, expressing the wish that Unesco should recognise it for its world heritage importance.

He recalled how an agricultural market fair in the 16th century had withstood famine, war and economic crises; how it was a key date in the calendar of the Travelling community; and how it reflected “the most democratic aspect of horse breeding activity”.

Animal welfare was a particular focus of his speech – Mr Higgins would go out of his way later on to greet Irish Society for the Prevention of Cruelty to Animals (ISPCA) wardens – and he spoke of the “five freedoms” for animals, including freedom from hunger, thirst, malnutrition, pain, and “freedom to express themselves”.

It would take a good 90 minutes and more, however, before the President would get to express his own fondness for the fair’s draughts and shires and thoroughbreds, due to a constant throng surrounding him on his walk through the town with Mrs Higgins. His accompanying security facilitated the fandom with good humour, helping people take selfies.

Mr Higgins stopped to admire saddles, and turnout rugs, and saddler Peter Murdoch offered him a bargain. He stopped to talk to Alan Egan from Laurencetown, astride Cassie, a four-year-old cross between a draught and thoroughbred. “She’s for sale too,”Egan told the President, in hope and anticipation.

It was well after 6pm when the entourage reached the lunging ring after many more “howya, Michael D” shouts and handshakes. Mr and Mrs Higgins seemed in no hurry to leave, as they watched stallions performing, and the master of ceremonies hoped the ninth president would also be the “future” one with “ a little help” from Ballinasloe.

Earlier, Independent presidential candidate Gavin Duffy had also visited the fair and spoke of the high insurance costs for the annual event which attracted an estimated 70,000 people on Sunday alone.

“Ballinasloe Horse Fair organisers now have to find €15,000,” Mr Duffy said. “Their [insurance] costs have jumped €6,000 in less than 10 years and yet they have never made a claim.”

“We are facing a real danger that such wonderful fairs and festivals around the country may cease to exist,” Mr Duffy said.