Irish may become compulsory for students from abroad 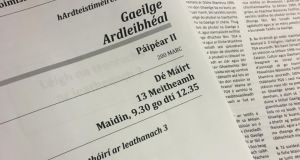 There are opt-outs available for studying Irish for pupils who have been abroad for a period of time or for students who say they have no understanding of English.

Pupils from abroad may be obliged to study Irish in school under new measures being considered by Department of Education officials.

At present, there are opt-outs available for studying Irish for pupils who have been abroad for a period of time or for students who say they have no understanding of English.

There is concern, however, over the fairness of these rules given the large volume of students who drop out of Irish in the run-up to the Leaving Cert on the basis of being “pupils from abroad”.

Over recent years, between 1,000 and 2,000 students every year have been receiving Irish exemptions on this basis during the senior cycle.

Education sources say significant numbers have been studying the language for years but drop it in the run-up to the State exams as it is perceived to be a “difficult” subject.

In a statement, the Department of Education has confirmed that it is finalising a review of the “policy and practice in relation to exemptions from Irish”.

In addition, it is drafting revised circulars which will set out new rules for exemptions from the study of Irish. A consultation process, including an online survey, will also get under way.

An internal document seen by The Irish Times states that the review will not look at ending compulsion, but will assess the “potential of ending the opt-out facility for new entrants to Ireland”.

The review will also examine the granting of exemptions from studying Irish on the grounds of special educational needs. This is because thousands of students who secure this exemption are sitting exams in foreign languages.

Latest available official figures show more than 3,800 students were granted an exemption to sit the Leaving Cert Irish exam in 2016 on the grounds of a disability. Almost 60 per cent of these students went on to study a European language such as French, German or Spanish.

Students or their parents are required to submit a psychologist’s report in order to secure an exemption on the grounds of disability. However, the validity of some privately commissioned psychologists’ reports have been queried by senior education figures.

Some school principals have questioned the reasons behind the numbers, amid claims that the system is being “gamed” in order to avoid what many students perceive to be one of the most challenging Leaving Cert subjects.

However, the Dyslexia Association of Ireland has insisted there are genuine reasons why many students who secure exemptions end up studying a European language.

Any public consultation on the issue of Irish is almost certain to trigger a fresh debate on whether Irish should be compulsory.

Fine Gael controversially proposed to remove obligatory Irish in advance of the 2011 general election, though the policy was shelved when it entered into coalition government.

The party’s then leader Enda Kenny argued that Irish should be made an optional subject after the Junior Cert. Mr Kenny, a fluent Irish speaker, said the policy of compulsion had led to a “pervasive, negative association” with the language among many young people.

He said students should be “partners in the education process rather than unwilling participants”.

The move was opposed by Fianna Fáil at the time which said it would spell the “death knell” to the language.

Party leader Micheál Martin said there was evidence of a “tremendous renaissance” of the language with growing popularity of gaelscoileanna.