Donohoe set to cut property tax rate after the budget 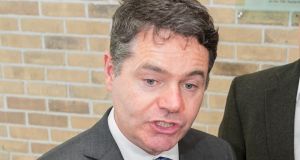 Minister for Finance Paschal Donohoe is set to cut the property tax rate to prevent steep rises in annual bills but is resisting pressure from the Independent Alliance to announce the measure in next week’s budget.

The base rate is currently 0.18 per cent of a home’s value, but valuations have not been updated since the Local Property Tax was introduced in 2013, when property prices were much lower.

Well-placed Government sources said the rate is likely to be cut when the new valuations take effect from November 2019, with so-called “regional smoothing” measures to deal with bills that could still be higher after the rate cut. The exact level of the rate cut has yet to be decided, however.

The 0.18 per cent rate applies on all homes with a value up to €1 million, with houses above that subject to 0.25 per cent. Councils have the power to adjust the base rates by 15 per cent.

The issue has become a flashpoint in talks around next week’s budget. The Independent Alliance – particularly Minister for Transport Shane Ross – is pushing for pensioners to be exempt from property tax.

However this is likely to be rejected and there is growing frustration in Government circles at the alliance’s continued focus on measures for the elderly.

The initial refusal of Minister of State for Health Promotion Catherine Byrne to say if she would support Minister for Housing Eoghan Murphy in a confidence vote last week and the anticipated decision of Louth TD Peter Fitzpatrick to resign from Fine Gael are cited as two examples of Fine Gael difficulties threatening Government stability.

Property tax changes will not be announced until after the budget. The option to change the base rate was one of a number of recommendations in a report carried out three years ago by Dr Don Thornhill. Among other proposals, it suggested proceeding “with the revaluation but legislate to allow for rate changes at a. national level or b. at the level of each local authority area”.

Senior sources disclosed that Mr Donohoe is likely to follow this option by cutting the 0.18 per cent rate, although it has yet to be decided by how much.

Meanwhile, the Health Service Executive is expected to seek well over €1 billion in additional funding for next year.

It is understood health service chiefs are pressing the Government to increase the HSE’s core budget by several hundred million euro to maintain existing levels of service, given the massive overrun which will be recorded by the end of 2018.

The health service is also expected to seek well in excess of €300 million in extra money to finance additional services needed to take account of demographic pressures and an ageing population.

Additional resources for new developments, as well as to fund pay awards for staff which either have been promised to date or which are expected to materialise next year, are also requested.

Workers in voluntary agencies and organisations funded by the State to provide health and social care services – so-called section 39 employees – will be back in the Workplace Relations Commission on Tuesday seeking pay restoration similar to that provided to public servants. The HSE believes full pay restoration for section 39 workers would cost about €68 million.

The Government has also offered nurses increased allowances worth about €20 million. However, nursing unions are seeking additional payments to tackle recruitment and retention problems .