Hundreds of people were killed, many swept away by giant waves as they played on the beach, when a major earthquake and tsunami hit the Indonesian island of Sulawesi, authorities said on Saturday (September 29). 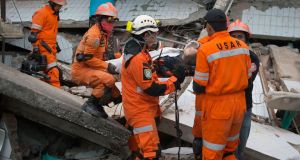 There are no Irish citizens believed to be injured in the deadly tsunami that has killed more than 832 people on the Indonesian island of Sulawesi.

A spokesman for the Department of Foreign Affairs said the embassy in Jakarta were not aware of any Irish killed, injured, or believed to be missing in the aftermath of the disaster.

The department’s security advice for Irish people travelling to Indonesia is to exercise “a high degree of caution.”

Following the earthquake and tsunami the department said “it is strongly advised to avoid all non-essential travel to Central Sulawesi following yesterday’s earthquake and subsequent tsunami”.

The toll soared to 832 confirmed dead on Sunday, with authorities fearing the numbers will climb as rescuers grappled to get aid to outlying communities cut off from communications and help.

Dozens of people were reported to be trapped in the rubble of several hotels and a mall in the city of Palu on Sulawesi island, which was hit by waves as high as six metres (20 feet) following the 7.5 magnitude earthquake on Friday.

Indonesia, which sits on the seismically active Pacific Ring of Fire, is all too familiar with deadly earthquakes and tsunamis. In 2004, a quake off Sumatra island triggered a tsunami across the Indian Ocean, killing 226,000 people in 13 countries, including more than 120,000 in Indonesia.

The southeast Asian country is a popular tourist destination among Irish travellers.

President Michael D Higgins has sent his condolences to the people of Indonesia.

“Sabina and I send our condolences to those who have lost family members or have been injured and affected by the disaster,” he said.

“All praise is due to the first responders and to all those who have come to the aid of the victims. May they receive the urgent assistance, and the solidarity, they need from the global community and its institutions.”

Minister for Foreign Affairs Simon Coveney tweeted on Saturday that “our thoughts and prayers in Ireland are with all who have lost loved ones” in the tragedy.