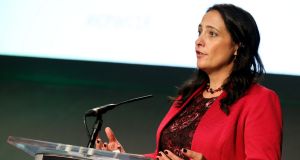 Catherine Martin TD: “Providing a directly elected Dublin mayor must be viewed in the context of the housing emergency and the transport gridlock Dubliners face every day.” Photograph: Maxwellphotography.ie

Voters in numerous council areas are to be asked next year if they want directly elected mayors.

The move was agreed by the Cabinet last week and announced on Sunday by John Paul Phelan, the Minister of State for Local Government and Electoral Reform.

The prospect of a directly elected mayor for Dublin has been referred to a citizens’ assembly for the capital to be convened next year.

A paper prepared by Mr Phelan outlined two options for reformed mayoralties. One is to establish a directly elected mayor with no extra powers but based on the current position of council mayors or cathaoirligh.

“Executive mayors, either directly or indirectly elected, could be put in place in Cork, Dublin, Galway, Limerick and Waterford,” according to a Government statement on Sunday. “The Government has agreed that the decision to establish the role of a directly elected executive mayor could rest with the electorate of the local authority through a plebiscite in each area.

“Further detailed proposals on the plebiscites and the questions to be put to the electorate, as well as the specific powers to be given to executive mayors, are to be brought to Government in the coming months.”

However, the Green Party criticised the decision to refer a mayor for Dublin to a citizens’ assembly.

“It’s frustrating that whatever progress comes from the Government on this issue is coming at a snail’s pace,” Dublin-Rathdown TD Catherine Martin said. “Providing a directly elected Dublin mayor must be viewed in the context of the housing emergency and the transport gridlock that Dubliners face every day. We badly need a strong co-ordinator across all of Dublin to deal with these issues, and we need it soon.”