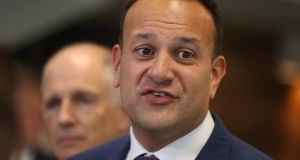 Taoiseach Leo Varadkar told his senior and junior Ministers they must inform the local Fianna Fáil TD when they are doing official engagements, such as the opening of new public buildings, in their constituencies.

Mr Varadkar made the request at a monthly meeting of his Ministers last week after the issue was raised directly with the Taoiseach by Fianna Fáil leader Micheál Martin.

It is understood that the request was made when the two leaders met in Killarney, Co Kerry, in July. One Minister said that such notifications “tend to happen a lot anyway” but suggested that some Ministers may ignore Mr Varadkar’s request as an election approaches.

Another also said that some Ministers would ignore the request and commented of Fianna Fáil: “It makes them look like they are part of the Government.”

It comes as senior Fianna Fáil representatives were told during a private presentation that more voters are open to supporting the party now than considered doing so before the last general election.

The party’s frontbench was given a presentation by Sean Dorgan, the Fianna Fáil general secretary, at a meeting in Leinster House last Thursday.

Sources present said Mr Dorgan outlined his view that the gap between Fine Gael and Fianna Fáil is not as wide as published opinion polls suggest. It is understood Mr Dorgan said that numerous opinion polls before the last general election showed Sinn Féin outperforming Fianna Fáil, but Mr Martin’s party came comfortably ahead of Sinn Féin, and within five seats of Fine Gael, at the 2016 general election.

Mr Dorgan is said to have estimated that Fianna Fáil’s constituency polls are showing it performing much stronger than before the last election, leading the party hierarchy to believe that its current strength is not reflected in national polls, a point consistently made in public by Mr Martin.

It is also understood Mr Dorgan estimated Fianna Fáil’s level of national support to be at 26 or 27 per cent, with Fine Gael at 29 or 30 per cent.

In a further change from the period before the last election, the frontbench was also told that more voters who are not Fianna Fáil supporters are still open to backing the party in an election.

Party sources said Mr Dorgan said there is a large group of voters whose support is there to be won, and a significant proportion are open to considering Fianna Fáil.

It was also argued that the Government’s satisfaction ratings are consistent in the early 40s, indicating many voters are open to voting for parties other than Fine Gael.