Government will look at ‘anything on table’ to help FAI, says Ross 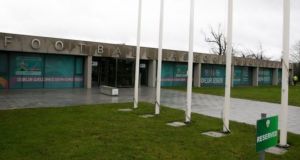 Minister for Sport Shane Ross has said the Government will look at any options put forward to assist the Football Association of Ireland (FAI) following the appointment of new independent directors.

Speaking on RTÉ’s Morning Ireland, Mr Ross said: “now we’ve got a new FAI, we’ll look at anything that’s put on the table”.

The Minister had resisted giving financial aid to the organisation as recently as last month, following a request from the FAI for an €18 million bailout.

Mr Ross welcomed the appointment of Roy Barrett as independent chairman, alongside independent directors Catherine Guy and Liz Joyce. He thanked them for “taking on what will be an extremely formidable task” and said it represented a “new chapter in what has been a disastrous story”.

While the Minister warned reforms had to be implemented to open the door to the restoration of Government funding and the possibility of a financial aid package, he said the “precondition had been met”.

Mr Ross said a blank cheque was not available for the association but that “we have a new dawn here, we have a new opportunity”.

There would be a particular emphasis on protecting junior and grassroots football, and the League of Ireland, Mr Ross said.

The FAI had strongly resisted the clearout of its board in recent months, Mr Ross said. “What we have succeeded in doing, against great resistence, is removing the entire board,” he said. “But that doesn’t automatically change the culture,” he added.

He said the Government would not “shy away” from discussing the future of the FAI in an upcoming bilateral meeting with Uefa, European football’s governing body, that is scheduled for next Tuesday.

“We’re meeting them in a new atmosphere,” he said. “Government stands ready to assist and look at any plans that are put down.”

Mr Ross also said he was focused on completing policy work rather than fighting a general election campaign. He insisted there was still time to pass his judicial appointments Bill in the lifetime of this Government. “It’s running close, but I don’t think it’s run out yet,” he said.