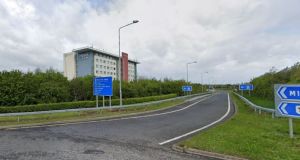 The passengers were dropped at the City North Hotel near Julianstown in Co Meath when the hijacked bus left the M1 at Junction 7. Photograph: Google Street

Three airline passengers who were sitting in a hotel shuttle bus when it was stolen from Dublin Airport did not realise any crime was under way until after they were allowed off the vehicle.

The English couple and a Colombian national were being collected by a shuttle bus from Terminal 2 at the airport just before 1am on Wednesday to be taken to the nearby Carlton hotel.

However, when two men from Co Meath got on to the bus and drove it away while the driver was not on board, the passengers did not realise anything untoward was happening. The vehicle, a Ford Transit, was stolen when the driver stepped away for a moment.

The suspects, who are related to each other and are from Navan, drove the shuttle bus from the airport up the M1 and pulled off at junction 7, dropping their passengers at the City North Hotel.

When the three passengers went into the hotel staff there realised something unusual had happened, and gradually it emerged the minibus they were on had been stolen.

The three passengers then made their way back to Dublin Airport by taxi and flew out of the country on Wednesday; shaken by the experience but uninjured.

The two men were eventually arrested, having stolen a second vehicle in Castleblayney, Co Monaghan.

The suspects, who are in their 30s, were being questioned on Wednesday night at Carrickmacross Garda station on suspicion of false imprisonment and unauthorised taking of the minibus.